Home FleetWatch 2017 Watch this video. It could save your life 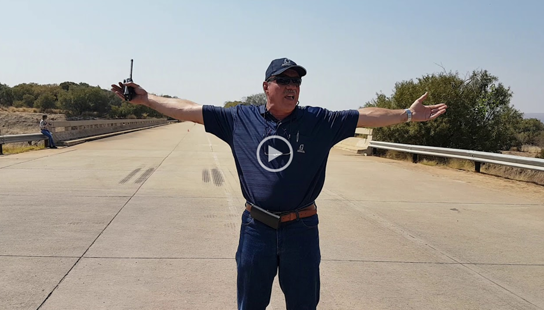 This story revolves around the accompanying video which is one of the most impactful demonstrations of braking distances and explanations of the importance of keeping the correct following distance I have yet seen writes Patrick O’Leary.

The demonstration was held at Gerotek during the Onelogix Group’s Driver of the Year finals where a number of suppliers, guests and staff attended for the day. This was a side-line road safety lesson put on by Onelogix for those guests.

The guy doing the talking is Jakes Jacobs of National Automotive Laboratories, a vehicle test engineer whose speciality is brake testing. Prior to forming this company, he was involved with the BMW Driver Experience programme, was co-owner of the Audi Driving Experience and founder of the VW Driving Academy. He also runs a transport company called NAL Transport so he also knows trucks well.

Jacobs has been involved with the Gerotek Test facility since 1999 where he has conducted numerous braking tests on both cars and trucks over the years. With driver training being his side-passion, he still helps out when asked to, such as on this day where he acted as MC of Onelogix’s DOTY proceedings.

What struck me about this demonstration and explanation is that Jacobs made vital road safety messages fun to listen to and therefore more impactful than a boring ‘keep your following distance’ lecture.

FleetWatch has always contended that imparting the message of road safety has to change. It has to become more attractive. It has to become fun. It has to become ‘sexy’. In that way, attitudes will change which is what we need. The way it has been imparted is not working. If it was, we wouldn’t be killing 15 000 people on our roads every year and recording over 900 000 crashes every year.

By injecting a large amount of humour into a very serious subject, Jacobs captured his audience in a way which I guarantee had everyone go away with a changed attitude towards their driving habits in terms of braking and following distances.