OK, I’ll admit the headline is a little misleading but I just couldn’t resist putting the trucking industry on the podium against a host of other companies from other sectors. Here’s the real story. We won the golf.

The occasion was the inaugural John Robbie Invitational Golf Day held last month at the Johannesburg Country Club in support of Crime Line, an anonymous crime tip-off service launched in 2007 as a tool for members of the public to blow the whistle on crime. 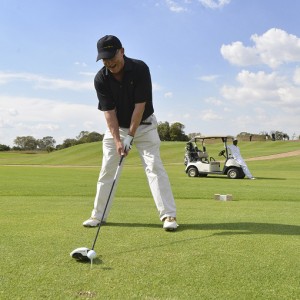 The proceeds of the golf day went towards the recently established Crime Line Foundation Trust in a bid to continue and broaden the efforts of the tip-off service in curbing crime in South Africa. Talk Radio 702 breakfast host, John Robbie, an avid supporter of Crime Line, gave his name to the golf day, which will now be an annual event.

Daniel Slabbert of the South African Disabled Golf Association (SADGA) was nearest to the pin, while Henk Roets of team Minopex received the prize for the longest drive.

Always up for a prank, Simpson tweeted that he sent a tip-off to Crime Line’s 32211 SMS number which read: “Dear Crime Line. I would like to report a crime. I have solid evidence that John Robbie is cheating in his golf day. Please resolve this before 5pm today. Place of Crime is Country Club Johannesburg,” he texted tongue-in-cheek. Head of Crime Line, Yusuf Abramjee, responded to the tweet and assured Simpson that his claims would be investigated.

National Police Commissioner, General Riah Phiyega attended the prize-giving ceremony to pledge her support in strengthening the partnership between the South African Police Service (SAPS) and Crime Line. She thanked the business community for their generous support of the golf day, saying that “safety and security is not just a policing issue, it is a societal issue and concerns us all.”

During the prize-giving DSTV announced that it would donate R1-million in airtime for Crime Line while Abramjee in turn called on members of the public to continue sending tip-offs to Crime Line and its partner Crime Stop.

Abramjee also announced that registration for the Crime Stoppers International (CSI) Conference is now open. “The CSI conference is coming to the African continent – and indeed South Africa – for the first time. Let’s all come together to showcase our country and to find sustainable solutions to our collective efforts to curb crime,” he said.

FleetWatch congratulates John Robbie as well as the entire Crime Line team not only on a great golf day – but also on all they are doing to help curb crime in South Africa. That the trucking industry is with you all the way can be seen by the fact that, looking at the participating companies, it is interesting to note there was great support from organisations involved in the trucking sector.

Not only was UD Trucks there to win the day but so too was RAM Couriers, Skynet, KIA, and Altech Netstar. Other sponsors like Spar and Servest rely heavily on trucks for their businesses while insurance companies such as AON also have clients in the trucking sector.

I may be biased but the way I see it is that the trucking industry had the largest presence on the day. Up trucking!

To watch a brief video of the day, click here.