It gives me great pleasure to direct our readers to three different stories in this magazine relating to the recognition of our truck drivers in various ways. The first, on page 28, tells of the launch of the 2016 Highway Heroes campaign by Regent Commercial Vehicles  Insurance (RCV). The second, on page 30, is a profile on Nduna Chari, a 42-year old father of two who arrived in South Africa from Zimbabwe in 2006 looking for work and has steadily climbed the career ladder from tip truck driver to driver trainer in just a decade. The third, on page 32, tells of a local South African truck driver who took top honours in the international 2015 FleetBoard Drivers’ League which ran from 1 June, 2015 to 31 October 2015.

It is just so fantastic to see our truck drivers being recognized and afforded the attention so many of them truly deserve. As Regent states of its Highway Heroes campaign: “The 2015 campaign highlighted the important role that truck drivers play in the economy  and how 53 million South Africans would be negatively impacted without the thousands of truck drivers who transport billions of Rands worth of essential goods to every corner of the  country 24/7/365. Daily, thousands of truck drivers make sacrifices that the majority of South Africans are unaware of – from not seeing their families for weeks on end to  travelling long distances across the country facing significant threats to their lives in terms of road accidents and truck hijacking.”

If the trucking industry is considered a Cinderella in the economy – as it is – then the position of the truck driver in the grand scheme of things is pretty much off the scele. Let’s face it, the only time truck drivers get attention is when some massive, high profile crash takes place such as what happened at Fields Hill – or the one near Alberton where one truck took out 47 cars. No-one notices or recognises the role truck drivers play in the agricultural sector, the mining sector, the pharmaceutical sector, FMGC sector and every other sector in this country. There is not one segment of the economy that will survive without the input of truck drivers. And yet they remain unrecognised and ignored. It if for this reason that we sing loud the praises of the companies in those three stories.

Let’s now move into daily life reality. Yes, the general public do not realise the role truck drivers play in their lives, nor do the politicians. However, operators which employ truck drivers and companies which rely on trucks to haul their goods should have a better understanding of – and empathy towards – truck drivers. But most don’t. I cannot tell you how many drivers I have spoken to on our Brake & Tyre Watch projects who, when asked if they have told their bosses about the numerous – often highly dangerous – faults on their vehicles, reply: “Yes, the boss knows but he says I must drive or be fired”. What nonsense is that? Section 49 of the National Road Traffic Act prescribes the Duties of an Operator, one of which is to ensure their vehicles are roadworthy. If you operate a truck on the road, you have a legal responsibility to your drivers as well as all other road users to ensure your truck of roadworthy. Consider this: Out 654 trucks tested during our Brake & Tyre Watch exercises, we have failed a total of 442 – that’s 68%. So do operators in the main care about their drivers? The answer is NO – and such operators give the whole industry a bad name. 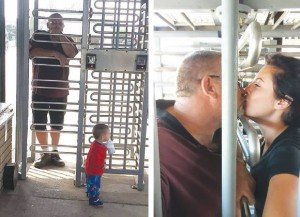 And what about customers? Do they care about truck drivers? To answer this, take a look at the pictures. That’s a truck driver waiting for his truck to be offloaded inside a company in Johannesburg. While he was there, his wife took the opportunity to take his son along to spend some time with him. The wife and son were not allowed through the gates. That little boy had to stand outside what is essentially a jail. The father could not hold him, hug him or kiss him. Nor could the wife, who had to be content with giving her husband a peck through the bars of the gate. She was, by the way, shouted at for being so close. Here is a driver who spends weeks away from his family and when he has a chance to see them, it is denied him. I know what company that is – and it shocks me that they treat drivers like  that. I also know of other cases where drivers have been treated like dirt by customers. One driver sat on the side of the road in his truck in Durban outside a customer’s premises for 69 hours before he was attended to. During that time, he had two tyres stolen and was eventually so scared of being asssualted or hijacked that he risked losing his place in the queue by driving to a safe spot at a truck stop many kilometres away.  And the customer didn’t give two hoots. If this is how companies – employers and customers – treat truck drivers, then how the heck can we expect the wider public to respect and acknowledge them for the essentail role they play in society. It’s the pits and needs to change!

Let’s get the DoT/industry relationship up and running

Proudly South African – for one day only