On Friday February 21st, Fritz Hellberg, a legend in the trucking industry, passed away. At his memorial service, Dave Scott, long-time friend of Hellberg and FleetWatch technical correspondent, delivered a tribute to this remarkable man. We reproduce it here in tribute to a man who was a true asset to the trucking industry in South Africa.

“I first came to know Fritz in the late seventies – he was then sales manager at for Mercedes-Benz NMI in Durban and when I look back over the years, it is quite apparent that I had the pleasure of knowing a man with a remarkable mind. Fritz was a visionary. He had a ‘Pentium iii’ mind in a ‘chrome vanadium’ environment. He could see the future! The modern term all young people use is ‘cool’ or ‘awesome’ and Fritz’s mind was truly awesome.

When I could not type my name or even send a fax, Fritz was promoting the concept of computerized mission simulations in the early eighties. We all thought of computers as massive IBM 360 mainframes but Fritz was already far ahead of the curve into portability and PC type hardware. What took hours in the eighties and boggled our minds, now happens in seconds and is still amazing.

More importantly Fritz was not only a visionary – he gritted his teeth and hung in there when most of us would have given up. That a computer could travel the routes of Southern Africa with a high degree of performance output accuracy was mind-blowing (almost unacceptable) to a society of hard-copy-driven sceptics. And remember, this all happened when satellite technology was also a future pipe dream.

Fritz not only put in mental effort but huge physical effort that took him away from home for days on end. He personally drove all the routes of Southern Africa in his Audi and captured the route profiles – gradient, altitude, speed limits, curves, road surface and so on. This wasn’t a cushy Internet search on Google – this was sweat, time, danger on the road and millions of long kilometres. And there were no cellphones when this all took place. Where was he on the road? Today we cannot leave home without a smartphone attached to us like an umbilical cord.

For a farm-boy from rural Glencoe born in 1940, Fritz had an amazing capacity for languages conversing easily in English, Afrikaans, Zulu and German. This helped greatly in business relationships and allowed him to communicate freely with truck drivers. It brings to mind that famous quote from Rudyard Kipling’s Poem ‘IF’ – ‘If you can walk with Kings yet keep the common touch’. Fritz had presence – he was a man who was at ease with ordinary folk and quite relaxed in a boardroom of difficult directors.

Fritz was involved in an accident near Durban where his beloved Audi left the road and ended up damaged in bushy undergrowth. He told me that when he was still sitting, seatbelt-strapped in the car assessing his next move, some vagrants emerged from the undergrowth and started to raid the car. Fritz mustered his strongest, loudest Zulu and told them: “God and Jesus are watching you now!” The raiders took such fright they disappeared back into the bush.

What I enjoy about TransSolve software is the unusual result that Fritz and I would come upon at the end of a joint consulting project. Fleet owners were often stunned by the fact that their trailers were the cause of high running costs or that their chosen routes – not ideal routes – resulted in high fuel consumption.

The tipping point for Fritz in business was when he stopped trying to sell the system and turned to licensing the software. And then he introduced Martin Dammann and his son Jens into the business. This was the tipping point for a succession plan and carrying his visionary torch into the future. Today we have Jens, Martin, Olav and a team of young experts who are constantly improving the TransSolve suite of programs. And more recent is the lady team member, Sorcha, Jens’ wife and builder of an international footprint for TransSolve under the banner of Truck Science.

Thanks to Fritz Hellberg’s foresight we have a world-class, transport-efficiency system in good hands. Today we celebrate handing over the TransSolve torch to a really ‘cool’ group of bright, young minds! Translated, Hellberg means ‘clear-mountain’. That’s Fritz’s legacy – he has left us a ‘clear-mountain’ of achievement.

Dave then read out a tribute from Patrick O’Leary, Publisher and Managing Editor of FleetWatch, on behalf of the FleetWatch family and team. We reproduce it here:

“Fritz Hellberg. What a man? What a legend. I recall Fritz travelling alone in his car over thousands of miles across South Africa as he measured the gradients, the curves and the straights that trucks would drive. Fritz had a vision and it was one based not on a desire to make his millions but rather on a passion to add value to the industry via the creation of a programme of route simulations that would enable accurate desk-top decisions to be made on vehicle selection. Some laughed at his idea at the time – but he just kept on driving down the road of his vision. He was the off-screen version of Forest Gump. “Drive Fritzy Drive”.

Fritz was a pioneer; a front-runner. The sterling work he did was never reflected in any arrogance of achievement. Rather, his genius was hidden under a veneer of gentle humility. Fritz was a Giant in a humble gown. He was a Mensch. He was such a good guy. I recall a saying which is so apt: ‘I like to leave people a little richer in spirit for knowing me.’ Fritz, you left us all millionaires in spirit for knowing you. Rest in Peace Good Friend. You have left your thumb-print indelibly imprinted on our industry.”

In recognition of his outstanding contribution to the trucking industry of South Africa, Fritz Hellberg has been elected into the FleetWatch Transport Hall of Fame. The trophy will be presented to the family. 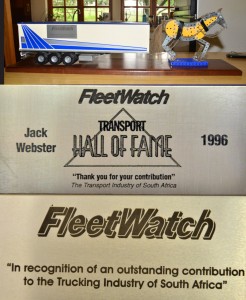