Home FleetWatch 2015 This horror incident was no ‘accident’

An horrific incident which recently took place on the N1 highway in the Grasmere area has instilled concern in FleetWatch that trucks are becoming targets by some sectors of society for ‘free shopping’ writes Patrick O’Leary.

It is well known that when a truck carrying goods ‘falls over’, everyone in the immediate vicinity rushes to the scene to grab whatever they can. It’s a case of the ‘free shop has arrived’ and the locals – in whatever area – take full advantage of this.

Mind you, it’s not only the locals. Passing motorists also get in on the act. I recall coming across a truck which went over near Howick. It was carrying bananas. I was on the scene for some time and was amazed at the number of trucks and cars that stopped with the occupants getting out trying to score some free bananas. Luckily, security was on hand to prevent this rampant theft.

The incident I refer to, however, takes on a more sinister note. In this case, the ‘crowd’ targeted the truck with the specific intention of getting it to crash so as to get their hands on the goods – in this case cattle.

The truck, belonging to Francor Transport Services, was hauling 100 head of cattle for Chalmar Beef to a feedlot. The driver, Thomas Kamti, was an experienced professional and had been driving for FTS for three years. As he approached an overhead bridge, people standing on the bridge started throwing bricks at the truck, one of which went through the windscreen. This resulted in Kamti losing control, veering off the road and the inevitable happened – the truck ‘fell over’. 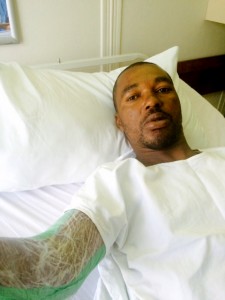 Thankfully Kamti was alive but had a broken arm and numerous cuts on his body. Some of the cattle, however, didn’t get off so lightly. Those on the top deck managed to scramble out and take off across the veld towards the local settlement. They were never seen again. There were around 50 of them. Those on the bottom deck were trapped – some badly injured.

And here’s the horror bit. It wasn’t long before locals were running towards the cattle carrying knives and buckets – the knives to hack meat off the animals and the buckets to dump the meat into.

Andries Venter, manager of the Farm Animal Protection Unit of the National Council of SPCAs (NSPCA), was called to the scene and was shocked by what he saw when he arrived. He described it to FleetWatch as “opportunistic barbarism”. 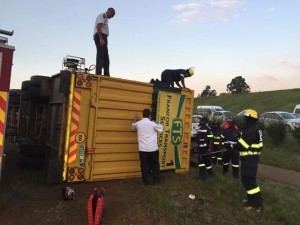 When the cops arrived, they held the crowd at bay but it was a tense situation. The Fire Department was eventually called and they used the jaws of life to try cut open the floor of the trailer so as to release the trapped cattle. It didn’t work. Eventually, Car Towing Services took over when the decision was made to lift the trailer back onto its wheels.

This was a delicate operation given that live cattle were still in the trailer but they did it with great skill. Francois van der Merwe, director of FTS, has nothing but praise for the CTS crew. “They lifted it up and put it down so gently. When we took the cattle off, none of them had injuries. I lift my hat to CTS,” he told FleetWatch.

What he doesn’t lift his hat to are the people who caused this mayhem. “I am heartsore about this. My driver was doing nothing wrong and then suddenly the crowd threw bricks at him. He did not deserve what happened to him. He could have been killed.” As it was, Kamti was taken to hospital and had to have an operation on his arm the next day. “He will be OK but he was badly traumatized,” says Van der Merwe. 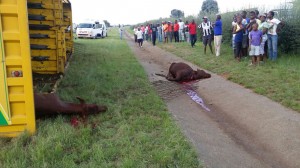 The cattle were also heavily traumatised by the incident and some of them were so badly injured they had to be shot. This too struck at Van Der Merwe’s heart. “The people who threw those bricks do not realize the pain they caused.”

While Martin Kotze, feedlot manager for Chalmar Beef, was reluctant to give FleetWatch a monetary value on the lost cattle, it runs into many many thousands of Rand. “At the end of it all, we offloaded 32 cattle. The rest – totaling 68 – died or were lost when they roamed off into the informal settlements,” he says.

FTS also incurred losses. “The trailer wasn’t too badly damaged but the truck tractor was and had to be sent to the panel beaters,” says Van Der Merwe. So apart from the human and animal misery, huge losses were incurred by all. 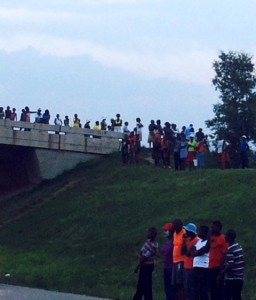 The whole incident was horrible and was ‘man-made’ by a crowd of thugs who deliberately targeted a truck carrying cattle to get free meat. No thought was given to the life of the driver or the cattle. That they were prepared to hack meat off live, injured animals makes it just so sick.

Was this a one-off? I certainly hope so. However, the callous actions of the people who caused all this – from the throwing of bricks to hacking meat off live animals – makes me think it can happen again. This wasn’t an ‘accident’. It was deliberate which tells me it can happen again.

Up to now crowds have gathered to ‘steal’ goods when trucks have an accident. They have not, however, caused the accident. This time they callously caused it and I think it is worth warning all trucks drivers to be prepared for the worst when they see people standing on bridges which they have to drive under. Terrible that we have to live like this isn’t it.

Some people may feel that with the extreme levels of unemployment and poverty in the country, the actions of those people are understandable. I don’t buy that. What they threw at that truck were not only their bricks but also their hearts and if we are becoming a nation without a heart, our future is indeed bleak.