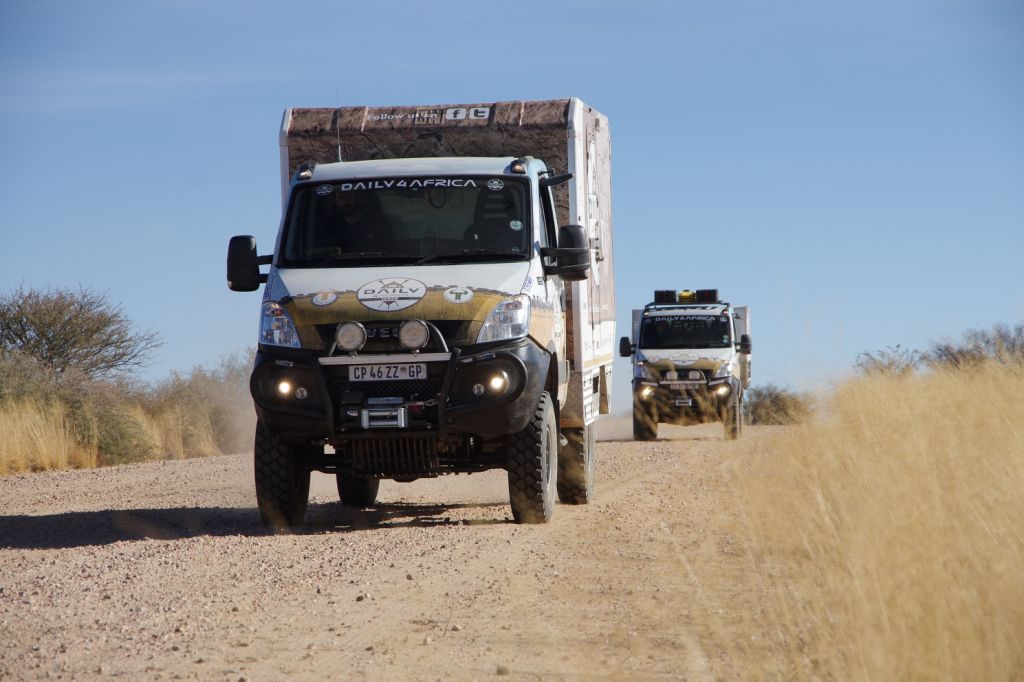 Two Iveco Daily 4x4s left Luanda in Angola last month on a two-month trip covering Angola, the Democratic Republic of the Congo, Zambia, Tanzania, Kenya, Ethiopia and Djibouti with the aim of increasing local awareness about road safety. The vehicles are transporting the Taurinorum Team composed entirely of members from Turin with expertise in organising roadshows and promotional travel throughout the world.

Daily4Africa is a project that was launched last year when the team drove two Iveco Daily 4x4s more than 11 000 kilometres across southern Africa in support of the Action for Road Safety campaign, initiated by the Fédération Internationale de l’Automobile (FIA) to promote road safety.

Launched with the purpose of spreading and reinforcing the message of safety and proper conduct on the road, it is an issue which has been at the forefront of many international activities by Iveco, supported by fellow CNH Industrial company New Holland Agriculture.

As well as being a major safety campaign which aims to save lives, the tour will is intended to also further raise the profile of Iveco’s light vehicle range in the African countries being visited. The journey itself will also provide the opportunity to test the strength and reliability of the Daily 4×4 by submitting it to an endurance test on African roads, taking in areas that are often inaccessible and full of hidden dangers.

The 2014 tour started in Luanda (Angola) on September 15th and will end in Djibouti (Republic of Djibouti) in mid November, travelling through seven countries and making stops at Iveco’s main dealers in the territory. At each stop, the vehicles will be shown to key media outlets, customers and the public, with the opportunity for test drives.

The teams driving the two Iveco Daily 4x4s will distribute fliers promoting the safe rules of the road. Finally, the entire journey will be documented with videos and photos published in real time on the main social networks where Iveco maintains a presence, as well as on the dedicated website www.daily4africa.com

About the Iveco Daily 4×4

The Daily 4×4 is built to operate on the roughest terrain with its elevated chassis ensuring that the driver has an excellent field of vision, a fundamental advantage in situations in which off-road can mean the total absence of a road surface. The approach angle of 50°, the ramp angle up to 30°, the angle of departure up to 41° and the wading capacity of up to 660 mm enables the vehicle to go anywhere.