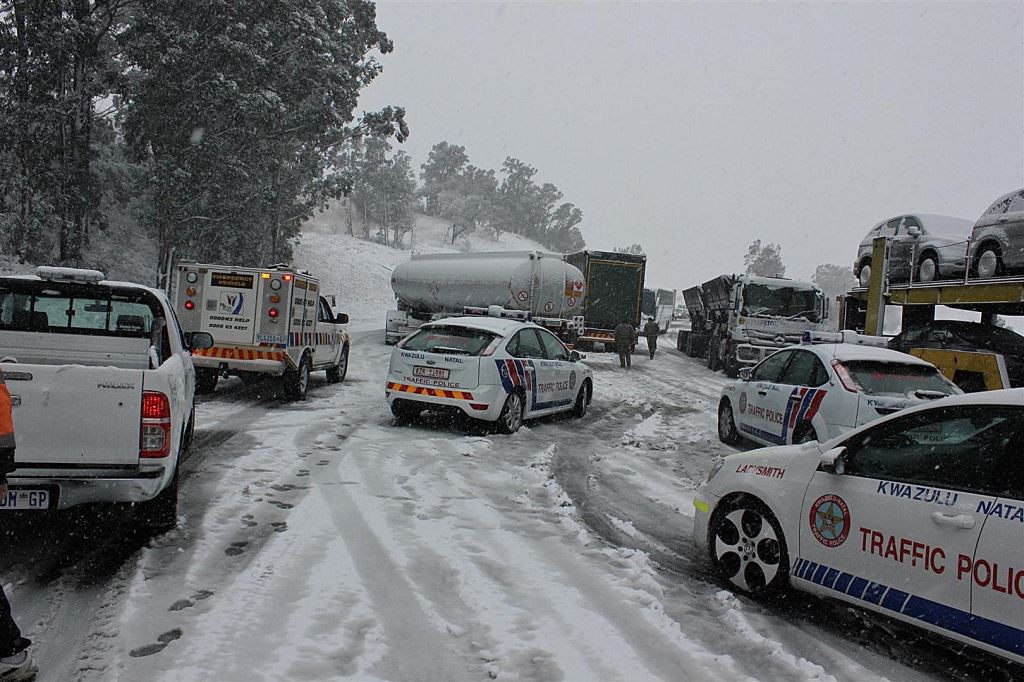 It wasn’t even a month ago that FleetWatch put out a warning of a cold front hitting the whole of South Africa. And it hit with a vengeance with record low temperatures being recorded in some regions of the country. Well, the bad news is that it’s coming again this weekend (Friday August 13th to Sunday 15th) although this time it seems it won’t be as wide-spread as the mid-July freezing weather – but there is a catch.

Whereas the last warning hinted of the possibility of light snow falling on Van Reenen’s Pass on the N3 (which didn’t happen), this one has warned of snow definitely falling on the pass, and that could mean big trouble for truckers and motorists driving that route if they are not prepared. High winds are also predicted from today as well as on Saturday and Sunday.

Philip Hull of Community Medical Services has been there before and reckons it can be a nightmare for people who get stranded in the snow. Although the weather boffins are predicting between 3cm to 5 cm of snow falling on Friday and Saturday, that won’t be anywhere near the heavy snow storm which hit the pass in 2011 when between 20cm to 30cm of snow fell. It was chaos on the pass as the accompanying pictures show – which I stress are from 2011.

As mentioned, this is not expected over this weekend but the big danger this time is Black Ice. This is when the temperature drops to freezing and water on the road (from light falls of snow melting) turns into ice making the road a slippery slide-away – and you can’t see it. So there is still a danger and the possibility of road closures should incidents occur. The area identified runs between Warden and Van Reenen’s as well as in the Free State (Phuthaditjhaba/Qwa-Qwa).

The N3TC has issued a statement saying they are making every attempt to ensure the general safety of all its road users along the route. “Our road incident management system (RIMS) including emergency medical services, law enforcement, the road traffic inspectorate, local authorities and route patrol services, have already been mobilised and are ready to provide support where required,” says the N3TC’s operations manager, Thania Dhoogra. FleetWatch has also been informed that brine (salt water) will be sprayed on the road to dissipate the snow.

The N3TC has also appealed to motorists and the general public to avoid the regions where snowfall may occur and, if possible, to rather delay their trips. “Should you have no option but to travel, we advise that road users stay aware of weather warnings and the possibility of associated road closures. Conditions may change quickly, thus it is important to be well prepared for any eventuality. Keep extra blankets, a torch, food and refreshments in your vehicle in the event of lengthy road closures. People with medical conditions, or traveling with babies, should ensure that they travel with sufficient baby supplies and medication,” says Dhoogra.

Real-time and verified traffic and weather updates can be obtained from N3TC’s 24-hour N3 Helpline by dialling 0800 63 43 57 or by following @N3Route on Twitter. The same number can be used to report problems or obtain emergency assistance if needed.