Home Fleetwatch 2014 Slow on the road but fast in growth

While most South Africans would love to kick Eskom’s head in for the constant power outages and interruptions the country has – and still is – is experiencing, one transport company which is quite happy with Eskom is Rotek and Roshcon Logistics Services, formerly known as Rotran.

According to Dennis Child, head of Multi-Axles Logistics Services at Eskom’s Rotek and Roshcon, Eskom’s power station expansion programme has contributed substantially to growth of the business as it has necessitated bigger and more sophisticated transport solutions than ever before. 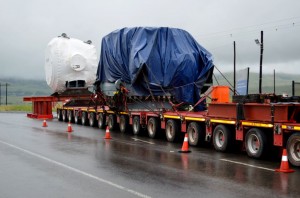 The company has seen substantial growth in the past few years, stimulated by economic growth and infrastructure development in South Africa and other Southern African countries. Its fleet has grown by 40% over the last seven years and R380-million has been invested, adding new vehicles over that time.

The company has grown not only in size but also in sophistication compared with the 1980s when power station equipment and electricity industry infrastructure components were transported by the old South African Railways and Harbours (SAR&H).

Rosherville Vehicle Services was established as part of the Eskom subsidiary, Roshcon, in 1993 to transport Eskom’s large equipment requiring maintenance, such as transformers, taking over from SAR&H as Eskom had completed construction of Majuba, the last power station at the time.

Rotek and Roshcon Logistics Services purchased 29 new vehicles in the past seven years, the largest of which is a Nicolas Tractomas D100 10×10, which has 16 wheels and can pull a load of 1 000 tons. Its top speed is 20km/h and it weighs 75tons DW. In addition, it’s the largest on-highway tractor in the world (Guinness Book of Records 2005) and has a fuel consumption of 7.5litres/km. 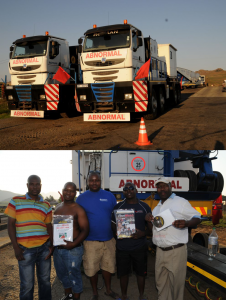 While transport can be viewed as the lifeblood of the country, abnormal load operations come with big challenges. Over and above the regulatory requirements, Rotek and Roshcon Logistics Services has to deliver on its mandate to Eskom and other companies within the 280 permitted operating days, including weekends, a year. This means Rotek and Roshcon Logistics Services can only operate for 9.5 months a year, transporting 18 000 tons of abnormal goods. In this period, there are other restrictions. For example, travelling is not permitted when it rains or when there’s mist.

The company also has to deal with road upgrades, which means using alternative routes, which cause delays in transporting cargo. Time in this business is precious. If you lose two days, you can’t catch up. Moreover, truck combinations can only travel 10km/h due to safety reasons, and it is required that a traffic official must escort these combinations at any given time.

To transport cargo between Richards Bay and Lephalale in Limpopo Province over a distance of approximately 1 200 km one way, the company pays up to R250 000 for permit fees and uses 195 000 litres of fuel per return trip (Johannesburg Depot – Richard’s Bay – Lephalale – Richards Bay).

The company also needs to ensure that its trucks meet the required safety and other standards and are equipped with the latest engineering technologies to maximise efficiencies. It transports expensive cargo, so it has a control room that allows for real-time monitoring of the truck movements, including using satellite tracking for security purposes.

“We also ensure that we maintain good relations with the communities in which we operate as this goes a long way in ensuring that goods are delivered on time. By communicating with communities through various media platforms, they become more receptive and understanding. They often share the message to alert other road users about when the abnormal trucks will be on certain roads,” says Child.

When the energy needs changed in South Africa, it was necessary for Rotek and Roshcon Logistics Services to increase its fleet from 16 vehicles, three bean trailers and three modules it inherited from SAR&H. At the moment, the company owns 43 trucks and eight bean trailers and employs seven times the number of drivers it had between 1993 and 2007.

During this period, Logistics Services’ transport capacity was 2 500 tons per annum, which has grown to the current 18 000 tons per annum. The company has increased its utilisation of 20% of its truck combinations to 100%.

While Rotek and Roshcon Logistics Services has expanded significantly in the past few years, it is again looking at substantial expansion this year. It plans to add eight vehicles and is looking at increasing equipment, modules and tractors by end-2014. This will ensure that the company will remain relevant in the industry and that the challenges being faced by the country due to population growth and the need for more generation capacity are dealt with, thus meeting the growth and development goals.