SkyNet Worldwide Express has taken a bold move by announcing that instead of marking up their prices to recover the cost of e-tolls, the company has opted to absorb these increased costs on behalf of their customers.

This is the first company FleetWatch has heard of which has gone this route and we see this as a move which not only holds enormous benefits for the company’s customers but also for the country as a whole. However…read on.

While the fight goes on against e-tolls, many Gauteng residents have started to accept that e-tolls will affect their lives and businesses – from the ubiquitous spaza store, right through to major retailers, car hire companies and the food industry. However, of all those affected businesses, it is the logistics industry – with its close relationship between the roads and its profits – that has the greatest challenge on its hands.

While the upfront costs of using the roads are bad enough, it is the collective spin-off affect the system will have on the country that is worrying. The term ‘over-recovery’ best describes this phenomenon. This happens in two ways. Firstly, the admin fees involved in the administration thereof and secondly, through the over-recovery of the costs from corporate South Africa.

As stated, FleetWatch sees this as a bold move by SkyNet but is it the right move? Absorbing these costs without off-setting them in some other area could impact adversely on the company’s bottom line. Given this, one can expect to see some innovative actions emanating from the SkyNet stable in the areas of improved scheduling, organisational streamlining, route optimisation.

This is one FleetWatch will do a follow up on for one thing is for sure, transporters have faced huge cost increases over the past years which is already impacting negatively on our global competitiveness. These high transport costs are – in part – as a result of sharp increases in the price of crude oil over the last two decades, low levels of development and maintenance of South Africa’s rail and port infrastructure, high levels of industrial action and a sharp depreciation of the Rand.

The worrying trend is that with the road transport component of South Africa’s logistics costs already being far higher than the global average, we cannot let it rise further. Absorbing the cost of e-tolls will endear SkyNet to its customers – but? Time will tell. 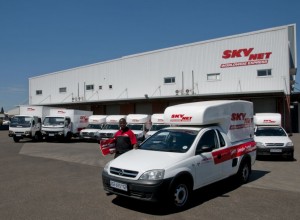 Cost is not the main factor

Interesting is that SkyNet’s announcement follows close on the heels of a research project which showed that companies choosing a delivery partner in the Courier and Express Parcel (CEP) industry consider reliability, efficiency and accuracy of data before cost. “You get what you pay for” is the adage that applies.

The survey – a Benchmark Research Report prepared by independent research specialists TerraNova – asked respondents what criteria they considered the most important when evaluating CEPs. The respondents – in fields as diverse as mining, finance, pharmaceuticals and retail – ranked ‘low cost’ only seventh out of 13 attributes. Turnover of the respondent companies surveyed ranged from less than R100-million to more than R5-billion per year, with 46% of them turning over R2-billion at least.

Given that CEPs are often used for the transporting of legal documents, chronic medications and other time-sensitive or strictly confidential packages, clients have certain non-negotiable expectations. The four most important attributes listed in the research were:

In other words, preferred CEPs need to be able to deliver in full, on time, to a wide range of destinations, while keeping clients informed regarding delivery status in real time, at a reasonable rate. The fact that “value for money” is listed as a need above “low cost” in seventh place emphasises the difference between the two.

This attitude is also apparent in the respondents’ rankings of available CEP options. The two most used CEP firms, global giant DHL and SA/Africa-based SkyNet, were also adjudged the top two performers in reliability, efficiency and value for money – and in the top three for accuracy of data.

It is thus we find SkyNet’s latest move even more interesting given that ‘low cost’ is not the main criteria is selecting a CEF partner.