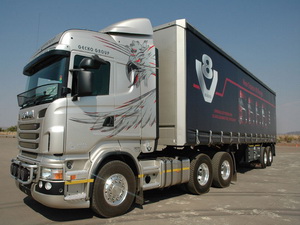 Scania southern Africa recently invited the trucking and transport media to experience a hands-on demonstration of its new “Opti-Cruise 3’ fully automated gear shifting system which has – and continues to – change the way in which commercial vehicles are driven and managed in the 21st century. Andrew Parker was there.

Scania introduced its first semi-automatic gear shifting system to the market in 1995 and over the next decade followed this through with a series of modifications and updates. In 2007, Opti- Cruise, which was standard fitment on all of Scania’s long haul vehicles in South Africa, was followed by Opti-Cruise 2 which has now been superseded by Opti-Cruise 3.

One of the most striking characteristics of the Opti-Cruise system is its ability to simplify the function of driving without removing that finite control away from the driver. In short, it speeds up and optimises the decision making process on what the driver should be doing and what makes the truck perform at its optimum. By analysing the data from sensors in the vehicle taking into consideration what the vehicle is doing at any particular moment in time, the system is able to predict what is going to happen should another gear or operating mode be selected.

The software has been developed and tested for different driving conditions such as highways and city driving. Opti-Cruise 3 also has a new method of calculating the weight of the vehicle and the inclination of the road, which enhances gear selection.

The fact that the accelerator pedal takes note of how quickly the pedal is being pressed means that gear changing is much more responsive to interpreting how aggressive the driver wants the gear selection to be. This means the driver can better influence the vehicle’s behaviour. Further to this, the actuator in the fully automated system has an inclination sensor ensuring it picks the correct starting gear.

The major hardware change on Opti-Cruise 3 is that the clutch pedal and clutch servo system have been replaced by an electric clutch actuator. This unit is only electrically connected and replaces both the master and slave cylinder of the manual clutch system. A new speed sensor on the lay shaft has also been introduced. This gives better control of the gearbox during a start and gear change.

There are currently two driving modes available. The standard driving mode and the power mode. The power mode offers a similar function as the current Hill mode, but with lower fuel consumption. In the future, it will be possible to introduce new modes of driving using the same spring-loaded switch. An easy read display shows which mode is in use.

Manoeuvring is excellent in the standard driving mode but for extreme situations, a special manoeuvring mode is also available. This is activated by depressing the lever for 0,8 seconds. Manoeuvring mode can be engaged anytime when you are in low range and is automatically released once higher gears are engaged. Interestingly enough with all this technology, manual gear changing is still possible.

Economy gearing
Highway driving is improved since the system has been adapted to economy gearing and allows economic driving without losing speed. There is also a ‘˜limp-home’ function which makes it possible to drive to a workshop even if the mechanics in the automatic clutch have broken down. A gear changing system in itself cannot improve fuel consumption. However, by maximising the time spent in top gears, the system makes it possible for the engine to run according to the low-rev strategy.

Opti-Cruise will not change down a gear if it determines that there is enough power on the current gear even if it is at low rpm (e.g. as low as 1000 rpm). The system will constantly predict, ‘˜what will happen if the vehicle changes up a gear?’ If the criteria are satisfied (for example acceleration level or vehicle speed maintained) then the vehicle will change up. This results in more time being spent in top gears.

Scania recommends the new fully automated Scania Opti-Cruise 3 for all on-road operating conditions, as well as for construction and timber haulage with moderate rolling resistance. Additional comfort, consistent driver performance and maximum fuel economy count as major advantages. The system is particularly useful in residential and dense traffic conditions that include a moderate number of stop-and-go situations.

Given South Africa’s sorry record in driving training, the Opti-Cruise 3 fully automated gear shifting system is, in our opinion, more suited to South Africa than it is to Europe.