South Africa is rated 100 out of 189 economies when it comes to the ease of trading across borders. This is according to the recent World Bank 2015 Doing Business Report. Despite this low ranking, huge opportunities exist for South African businesses to stimulate trade and conduct business beyond borders.

This statement follows the announcement recently of the opening of the Tripartite Free Trade Area – spanning across 26 nation in Africa – and which will improve investment flow and the facilitation and flow of goods in the region. All good news – but important too is the free movement of trucks. Border delays, as currently experienced, need to be solved to achieve full benefits.

This is according to Bruce Marshall, Country Manager: Zambia, Zimbabwe and Malawi of Maersk Line, who says that cross border trade efficiency depends a lot on a country’s logistics capabilities and the state of infrastructure in the region. “There is currently a gap in logistics performance when comparing developing countries like South Africa to other developed countries. However, regardless of this gap, South Africa is catching up quickly.”

He points to the World Bank Logistics Performance Index, which measures the logistics performance of countries and provides feedback on the logistics “friendliness” of the region. The index tracks overall Logistics Performance Index (LPI), customs, infrastructure, international shipment, logistics competence, tracking and tracing and timeliness. “South Africa compares favourably in terms of overall LPI with other African territories, ranking 34th in comparison to Nigeria, which was ranked 75th.”

“South Africa is catching up in these categories considering that Germany is the top logistics performer in the world, ranking number one in terms of overall LPI. South Africa is therefore performing well in comparison. While our infrastructure is advanced from an African economy perspective, we are competing against many more developed economies and thus need to ensure we benchmark ourselves against these. Consistent progress is being made in improving port operations, a key factor in supply chain efficiency, and this needs to continue apace, as not only are there productivity gaps to leading ports but the bar is continually being raised. 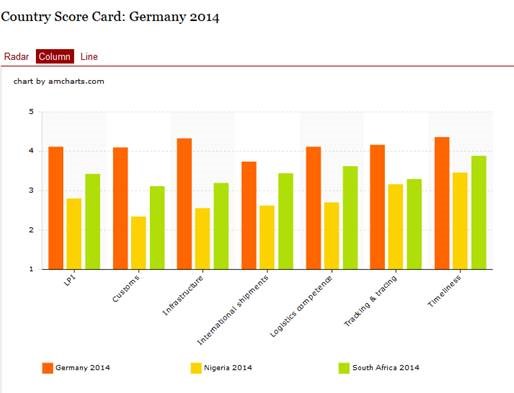 He says that the index reveals that South Africa currently scores 3.20 in the infrastructure category, which also compares favourably in comparison to Malawi (3.04), Zambia (2.31) and Zimbabwe (2.25). “South Africa is gradually upgrading its infrastructure, and the allocation of R3.5 billion of the nation’s 2015 budget to improving infrastructure will certainly improve South Africa’s logistics performance.”

Marshall adds that in terms of the customs ratings in Africa, Zimbabwe scores a low 1.89 in terms of customs compared to countries such as Zambia, which scores 2.54, Malawi at 2.79 and South Africa at 3.11. “One of the challenges that many countries in Africa face during cross-border trade is customs clearance, with trucks having to wait for days while documents are being processed. The development of rail infrastructure is a possible solution to overcome this challenge.

“Expansion in rail paves the way for economic growth and forms a critical part of the supply chain, because it is uniquely able to move large volumes of goods efficiently, with little impact to the people and communities served. The development and improved rail infrastructure in terms of the new rail routes, developing high speed trains and faster speed of existing trains, will enhance goods freight channels in Africa. As a result, this will aid South Africa and African countries in improving growth and developmental constraints by setting up transport corridors for goods to be transported by rail.”

Marshall says that by overcoming challenges – with assistance from both the public and private sector- South Africa will be able to stimulate trade and improve business efficiency in the country and beyond its borders, thereby improving its ranking in the foreseeable future. “South Africa remains in a unique position as a gateway for trade, and with commitment from both the public and private sector, the region is set to improve its ranking in foreseeable future,” says Marshall.