The South African Road Federation (SARF) has called on Government to prioritise a change in legislation pertaining to the transportation of vulnerable road users, particularly learners.

A recent taxi crash, which saw one child killed and 13 others critically injured, is one of five collisions involving groups of children that were reported over a two week period. In a spate of violent crashes over just 14 days, at least eight children died and more than 30 were critically injured.

“The status quo is completely intolerable,” says  Innocent Jumo, president of the South African Road Federation. “We simply cannot sit back and allow any more innocent children to be killed on our roads. We are therefore calling on the government and the Department of Transport to make an urgent amendment to the legislation pertaining to the transportation of passengers, and in particular the transportation of learners to and from schools.”

“As far as we are aware, there is currently no legislation that actually prohibits the transportation of passengers on open goods vehicles,” says Jumo. “In fact, in certain areas, particularly rural parts of the country, people will use almost any form of transport, regardless of the obvious risk to life and limb, as they feel that they have no other alternative when it comes to modes of transport to get them to and from school or work.”

Regulation 247 of the NRTA 93/1996 permits the conveying of passengers in the goods compartment of a vehicle provided that the sides of the vehicle are enclosed to a height of at least 350mm above the seating surface or 900mm above the surface on which the person is standing.

This means that only minimal side protection is offered and that there is no need for a roof covering. The regulations also state that passengers may not be conveyed in the goods compartment of the vehicle together with any tools or goods, except their personal effects, unless the portion in which passengers are being conveyed is separated by a partition.

According to the KZN premier’s spokesman, Thami Ngwenya, the provincial cabinet in that province is currently looking at the urgent implementation of safer modes of transport but also acknowledges that complexities of the problem in an area where there are limited modes of transport available. 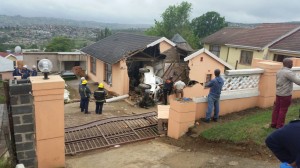 “In light of the ongoing and needless carnage on our roads today, legislation falls far short of adequate,” says Jumo. “We need urgent intervention and alternative options. Most importantly, we need law enforcement to play its part in protecting the lives or workers and children.”

He goes on to say that what is less clear is how we should approach the careless and reckless attitude of drivers on our roads. “While the transportation of passengers in open goods vehicles has actually been banned in certain countries around the world, there are experts in our industry that feel that we do not, in fact, need amendments to the legislation, just greater regulation and far more law enforcement,” he says.

“There are thousands of people living in South Africa today that still rely on these basic forms of transport, with little to no other options. If this is the case, and the legislation is not to be amended, then we need to take a long hard look at the behaviour of drivers on our roads and take serious action against those people who blatantly transgress the law, and ultimately devastate innocent lives.”

The problem is emphasised by Alta Swanepoel, legislation guru from Alta Swanepoel and Associates, who tells FleetWatch that there are about 1.2 million bakkies in the country out of the 11 million vehicles.

“If people are prohibited to travel in goods compartments of vehicles, 10 % of South Africans will be out of transport. It is sad but true. There is even an exemption under the old Road Traffic Act that exempts bona fide farmers from the requirement for the sides,” she says.

Here is the actual legislation that pertains to the carrying of people on Goods vehicles:

Circumstances under which persons may be carried on goods vehicle
Reg 247.
No person shall operate on a public road a goods vehicle conveying persons unless that portion of the vehicle in which such persons are being conveyed is enclosed to a height of-