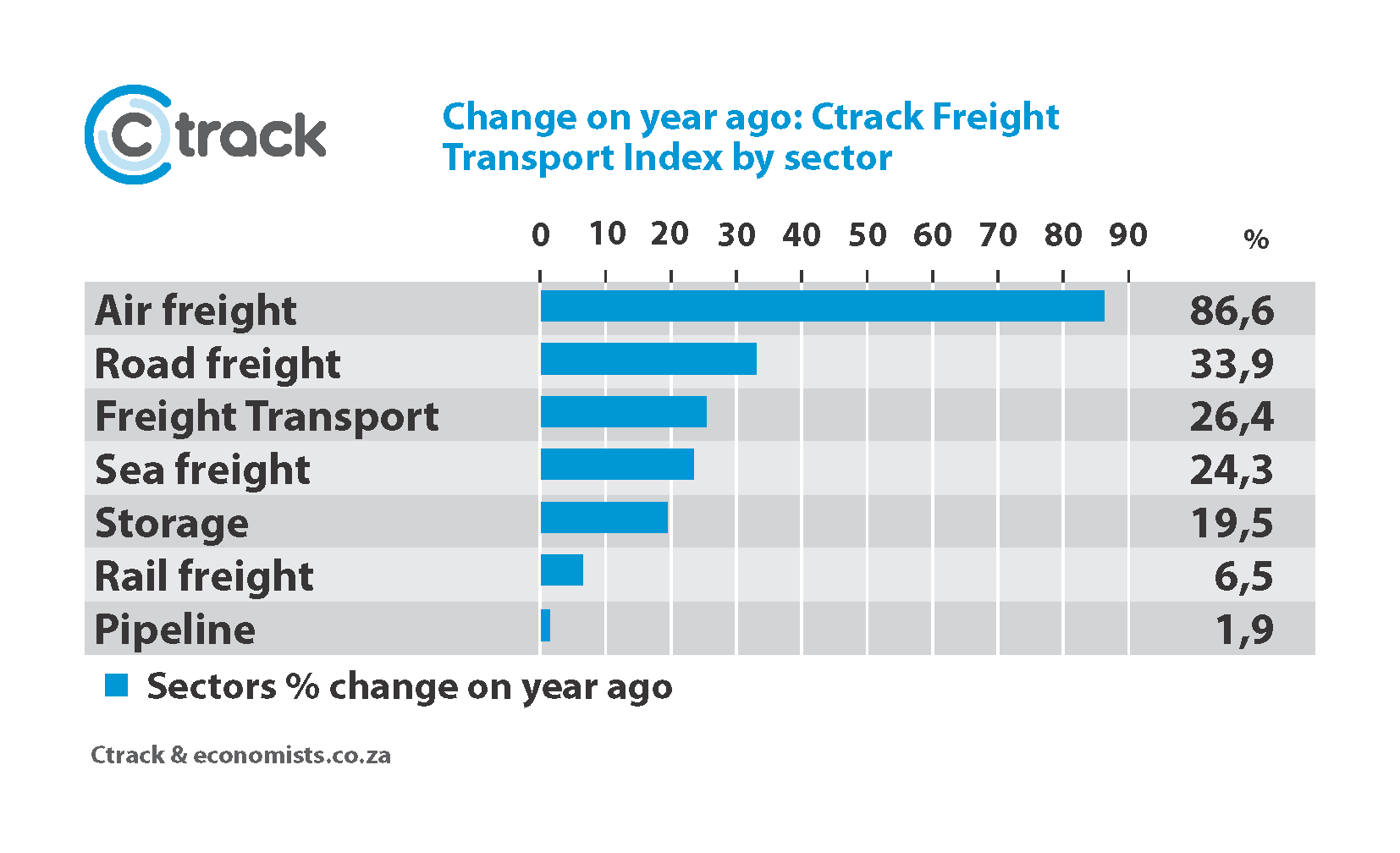 The good news is that as measured by the Ctrack Freight Transport Index, the overall logistics sector continued to show tremendous growth with year on year increases of 26,4% to end June. This might be from a low base due to hard lockdown in 2020 but the quarter on quarter growth reveals increases of 4,2%.

However, with the current performance of the Index being based on data from June, it is expected that the unrest and looting along with Level 4 restrictions experienced during July will have a negative effect on various sectors, including air and sea freight and naturally road and rail freight too.

Taking the unrest impacts out of the picture, during the last year every sector measured by the Ctrack Freight Transport Index recorded positive growth. The smallest gainer was pipelines with 2% and the most significant, air freight, growing 86,6% in the last 12 months. It must be noted that air freight also suffered most significantly during hard lockdown, so this growth might seem massive but is truly just a return to normal.

The quarter-on-quarter improvement in the Ctrack Freight Transport index bodes well for the 2nd quarter GDP growth at present. It seems like economic activity was relatively strong in the 2nd quarter, although one is a little wary that some of the improvement was due to higher export prices and some catch-up of other economic activity after the harder lockdown in the 1st quarter.

“While growth in the majority of sectors measured by the Ctrack Freight Transport Index is great to see, unfortunately, a variety of external factors will see this growth remain stagnate or even decline in the short term,” said Hein Jordt, managing director of Ctrack SA.

However, it is expected that the recent stricter lockdown measures may have had a negative impact on the service portion of the country’s GDP so only time will tell if the freight transport and GDP relationship remained as is during the second quarter.

Road Freight only sector that has fully recovered.

Measuring the changes in the activity of the different transport sectors over a two-year period indicates that the majority of the sub-sectors measured by the Ctrack Freight and Transport Index have not yet returned to pre COVID-19 levels. Only road freight has fully recovered and surpassed previous levels, mainly to the detriment of rail freight, which still struggles along. Rail transport is still about 16% off its previous highs due to factors such as some derailments on the coal line and some problems on other lines that continue to hurt the sector.

Sea freight is very near to previous levels, and that is encouraging. Overall, the freight logistics sector is still about 3% away from its prior highs.

The recent closing of the N2 and N3 and Transnet Ports due to looting and unrest will most definitely mean that the Index for those sectors will show month on month declines in July and August.

The effects that the recent unrest will have on the entire transport sector is concerning. The knock-on effect of road and port disruptions will include negative impacts on rail, pipelines and perhaps even air freight. The effects of the riots and lockdown Level 4 have not yet been felt, and we will have to wait for the July numbers before we can truly ascertain what effect it all will have on the transport industry.

“While the recent unrest was frightening to see, it once again highlights the need for a reliable tracking and fleet management solution. Ctrack offers a wide variety of bespoke solutions for every industry. These solutions will ensure that vehicles and cargo are always visible and contribute to increased safety and ability to plan around any delays,” adds Jordt.

A 19% improvement in 11 years is a far better performance than the overall SA economy that only experienced an increase in GDP of 3,6% over the same period.

This growth is partly because containers are becoming increasingly popular for the international transportation of goods as containers can easily be transported by various modes.

In the quarter ending in June, South African Ports handled over 13 000 TEU’s a day. TEU represents Twenty-foot Equivalent Unit, meaning that the actual number of containers could be far less with many containers these days of the forty-foot size. Regardless, that still represents a figure of at least 6 500 containers a day. More than half the total containers passing through South Africa are handled by the port of Durban, which moves approximately 4 150 containers per day. This equates to three containers a minute that needs to move in the port of Durban. While the numbers are impressive, it shows the serious problems Transnet Port Terminals (TPT) face when they must do manual loading and sorting due to factors such as the recent computer hack.

Doing this by hand and with walking talkies and a spreadsheet is not possible. No one person can reliably replace a computerised system that handles thousands of containers and trucks every day and ensure that all containers are loaded onto the correct truck or ship.

An additional contributing factor is that South Africans have become poorer in real per capita income. We can no longer afford as many imports as was possible before 2014, and this has also had an impact on the throughput of containers.

Much of South Africa’s current good export performance is due to high commodity prices rather than improved or more efficient production. In other words, South Africa is slowly losing out on global opportunities. This can be seen in the graph sowing the comparison of world container and South African container throughput.