It’s definitely not only a man’s world and the proof of the pudding is in the winning – Transport for Cape Town were recently awarded the Most Innovative Women Training Programme Award at the fourth Women in Construction Awards held recently.

The Women in Construction Awards honor women who have pioneered the development of the African built environment. 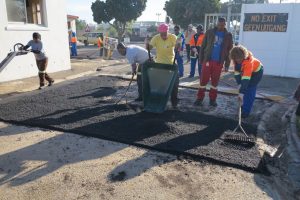 The City, over the past 12 months, established four all-female road repair teams based at TCT depots in Ndabeni, Fish Hoek, Heideveld and Kuils River as part of the Expanded Public Works Programme (EPWP) within TCT. Thus far, up to 24 women have been trained to repair and do maintenance work on roads, footways and stormwater infrastructure in these areas.

The purpose of this programme is to empower women in the workplace by providing them with skills for technical and physical work that is generally associated with men. With the skills and entrepreneurial abilities they develop during the 10-month employment period, these women will be better equipped to find placement in the permanent job market. 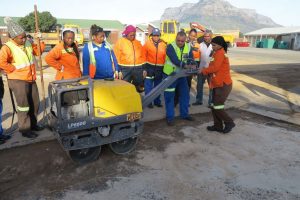 Later in May 2016, the City approached the South African Road Federation for further training assistance to improve on the skills learned by the women to date. The SARF offered a two day course on Best Practice in Hand Asphalt application, designed specifically for emerging contractors and the domestic road rehabilitation market.

On 14th and 15th June the women attended a full day of theory training at the City’s Ndabene depot, under the tutelage of Mr John Onraet, an independent asphalt professional practitioner. This was followed by a full day’s practical during which the women prepared large patches for repair.

The patches were primed and surfaced with hot mix asphalt. The correct techniques for compaction were carried out and the patches were successfully completed.

The manual used for the best practice tuition was produced by Much Asphalt and they are duly acknowledged for this best practice guide document.

Further training in this regard is planned for the CoCT supervisors of the various depots servicing Cape Town.