There is one hardship I don’t think those who experienced it will easily forget. I refer to the inaugural Sun International/Radio 702 CEO SleepOut which took place in Sandton in June. The idea behind the SleepOut was to get captains of industry to experience the hardships and conditions of life faced by thousands of homeless and less fortunate people. The CEOs endured it for one night. The homeless endure it every night. The event was also intended to raise funds for charity, in this case, for Girls & Boys Town which looks after neglected, abused and unsafe children. And it did so admirably with just under R25-million raised. Although purposefully held in winter to expose the CEOs to the uncomfortable weather conditions faced by the homeless, no-one in their right mind would have deliberately chosen the coldest night of the year. That was by chance rather than by design but the weather conditions were perfect to chill the pavements to a cool minus two degrees and the colder the pavement, the better it was for it is on this chilly ‘mattress’ that the homeless sleep every night. 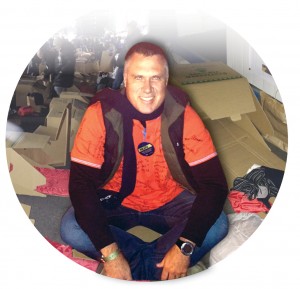 I got wind of the fact that Arno van der Merwe, CEO and executive director manufacturing at Mercedes-Benz South Africa, was taking part so I phoned him at around 9.30pm and again after 12.00pm when the cold had really set in. Our first conversation was tinged with his exuberance at the great turnout of CEOs and the camaraderie that had already started to build up among the guys and dolls. “I’ve got my cardboard box, my sleeping bag and I’ve had my cup of soup,” he enthused. The temperature was then about 2 degrees and they were told it was heading for around minus 2 degrees after midnight. I called him again after 12.00pm. The temperature had dropped to zero but just as the cold was biting deeper, so too had the depth of the experience gone deeper reaching into his soul and touching his heart. “It is sobering to realise what we’ve got and how important it is that we try close the gap between those who have nothing and those who have a lot.” On this point, he said the networking between the CEO’s had been incredibly positive revolving not around their own businesses but rather around how the business sector can contribute; how it can grow the economy so as to create a better life for all. “What has amazed me is how many people are really committed to South Africa and committed to making a difference. We have 250 really influential business people here and all have a similar mind-set and all want to contribute to making South Africa a better place,” he told me.

Another man from the trucking industry who took part was Brendan Horan, CEO of MiX Telematics. Horan participated fully by not only living the experience but also getting his company to go one step further by offering – as an extension of their participation – five, 90 day internships to previous Girls/Boys Town residents. “At 26.4%, unemployment in South Africa reached a 12 year high in the first quarter of 2015 with the combined youth and young adult unemployment rate at 39.9%2. This is a scary reality and I believe that the lack of skills locally plays a significant role in driving up these stats. It is up to us, as corporate South Africa, to start really improving ways in which we can develop individuals to gain tangible experience in the workplace and to ensure that they have something to bring to the workforce as a means to further bolster quality skills and increase employment,” he says. Well done MiX Telematics.

Prior to this event and ever since, I have been watching closely the contribution being made to society by the business sector – and particularly from the trucking sector. It is substantial and admirable. In this issue, for example, we highlight on page 16 a donation from Bridgestone of R1-million to the Pink Drive initiative. There are many others. One which really stands out for me, and which I have been waiting for a chance to feature in a wider context, goes back to March this year when Ernst Prost, the CEO of lubricant manufacturer Liqui Moly made his first visit to South Africa. In the morning prior to the afternoon press conference, Prost visited children from the slums of Johannesburg with Joint Aid Management (JAM). The aid agency looks after the most immediate needs of the little ones, providing them with food and an education. This encounter touched Prost so much that he announced, off the cuff at the press conference that, as from that day, Liqui Moly would in future donate R10 for every item sold in South Africa. “We look after trucks, we look after cars, we look after our customers and we look after people. The bottom line is the economy must serve the people and not the other way round,” he said. He also announced the establishment of a foundation which he said he personally would provide with more than R6.5-m from his private assets as the foundation’s capital baseline. The foundation is named the ‘Ernst Prost Foundation for Africa’. So impressed was I by this man’s genuine commitment that I called him aside after the conference for a video interview. ‘Oil and porridge’ is how he describes the undertaking to become charitably active in Africa. Oil represents the product sold with which profits are made in order to then be able to help children – even if it is just porridge that can be bought with it. Please click here to hear the interview. His views are worth listening to.

All this tells me one thing. Increasingly we are seeing the South African business sector taking on what the politicians should have been doing for years, namely, ‘serving the people’. The good stuff emanating from the business sector is such a refreshing change from the on-going clap-trap we hear from politicians who, in my opinion, have all but forgotten the sorry lot of the poor in this country in their constant striving to enrich themselves. Politicians need to adopt the true meaning of the motto of the SleepOut: “Go beyond profit to purpose”. At the moment they are diligently practising the first part of it but then stop there. It’s quite sick actually – and very sad.

May 2016 make me once again Proudly South African

Transport Month should be changed to Transport Day

Who is there left up there to trust nowadays?