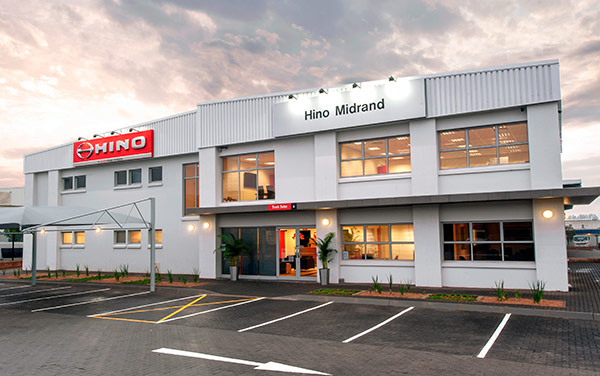 The McCarthy Group has a new flagship dealership in Gauteng , Hino Midrand which has been relocated to a large new site near the existing McCarthy Toyota and Lexus outlets.

This is all part of an on-going programme by Hino dealers countrywide to build new facilities or upgrade existing dealerships. Almost half the dealers have been or are involved in projects of this nature between 2010 and 2014 with a total investment of more than R100-million.

The McCarthy-owned Hino Midrand operation has been around for more than 25 years, but for much of this time it was a satellite of the major Hino dealership in Selby and was basically a parts and service operation until a new, fully-fledged Hino facility was built in 2005 and this outlet was Hino Dealer of the Year in 2007.

“We rapidly outgrew that facility and early this year construction started on a 10 000m2 site to erect our new state-of-the-art dealership that is planned to be viable for the next 20 years,’ explained Hennie de Villiers, the general manager of Hino Midrand and the divisional managing director for all six Hino dealerships in the McCarthy Group. “Total cost was R20-million.’

The workshop has 16 double work bays and there are three 22m pits with the target being to service 20-30 trucks a day. The servicing of trailers will also be undertaken and the dealership offers other specialised services such as wheel alignment and balancing, air-conditioner gassing and repair as well as brake repairs.

Sales of new trucks are currently running at a rate of 20-25 a month with strategies in place to increase that rate.

A fully-fledged parts operation is being developed as in the past most parts sales have continued to go through the Selby dealership. Parts are delivered to Hino Midrand four times a day from the McCarthy parts hub and twice a day from Hino SA.  Hino Midrand will offer a 24/7 parts supply and emergency breakdown facility.

The current staff complement is 34 people, but additional employees are being recruited which will bring the total to almost 40.

“Finding the right people with proper qualifications is not easy,’ said De Villiers. “However, we are delighted that Hino is starting a sales cadet programme next year and we will insist that all our McCarthy Hino dealerships participate in this programme to develop new talent.’

Hennie de Villiers worked for Toyota SA Trucks (the forerunner of Hino SA) for 14 years as sales and dealer development manager, before joining McCarthy eight years ago to manage a passenger and light commercial dealership in Gezina, Pretoria, before being appointed to his current position at Hino Midrand.

He says he is embarking on a structured programme to upgrade and improve the level of customer service provided by the parts and service operations in all six McCarthy Hino dealerships as a precursor to attracting new customers and increasing sales.

“Top quality after-sales service is the critical success factor in the retail truck industry and I am determined that all our Hino outlets will perform at the highest level in this aspect of their operations,’ concluded the enthusiastic general manager of Hino Midrand. (The other McCarthy Hino dealerships for which he is responsible are located in Selby, Empangeni, Mobeni, Pietermaritzburg and Pinetown).