FAW Vehicle Manufacturers SA is officially launching its new ‘Tiger’ into the medium truck market in May this year. To give our readers a glimpse into what is to come, FleetWatch technical correspondent Dave Scott visited the factory to see the new model coming off the line.

The ‘Tiger’ will be over 8 500kg gross vehicle mass (GVM) so it won’t be reported in the medium category of the NAAMSA results. Instead, it will be reported as a heavy truck. Cleverly though, the ‘Tiger’ will fall under 9 000kg GVM which will allow the truck to run at the current national speed limit of 120kmh. And then the extra GVM should allow for a payload advantage in the medium segment – that’s if the ‘Tiger’s’ tare mass is OK and high tensile steel is used for the cargo body instead of mild steel.

You gotta hand it to the Chinese! They are heavily invested in their assembly plant and cargo body shop at Coega in the Eastern Cape and are exporting into sub-Saharan right-hand-drive markets. And FAW is starting from the bottom in a highly competitive medium segment where the Japanese manufacturers absolutely dominate.

Taking out the van market segment lends perspective to the total medium market – 38% of the medium truck market belong to vans according to published press statistics from Lightstone Auto. 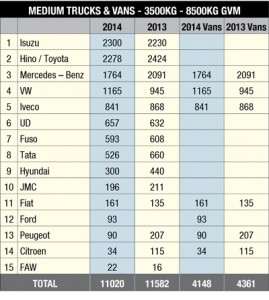 Listening to the sales chatter among truck dealers, the medium truck market is ‘price-sensitive’. Why then has TATA’s share ploughed so deep that it appears never to have recovered from the 2008 global financial crisis? The nine year trend for TATA must be giving the Indians much high cause for concern as sales head south. Somewhere here is strategic failure and it’s not in the ‘price’. 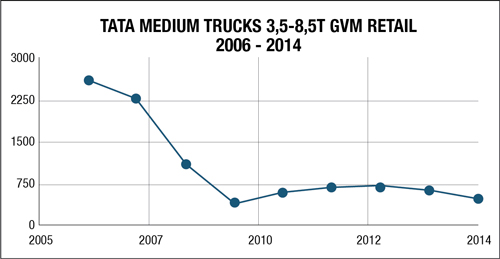 So what’s the declared strategic intent for FAW’s ‘Tiger’? The ‘Tiger’ will come with Cummins ISF 3,8 litre power/torque multiplied in a 6-speed ZF transmission. FAW is placing much faith in the power of these two well-known brands to provide credible recognition for the ‘Tiger’.

One technical spec on the ‘Tiger’ pushes it into the heavy class – a full-air ABS braking system. A strong technical feature, air brakes are easier to maintain than vacuum/hydraulic or air/hydraulic systems and are perceived to be fitted only to heavy and extra-heavy trucks. This is also an advantage when towing a trailer as vacuum brakes do not work with trailers. FAW did not disclose ‘Tiger’s’ gross combination mass (GCM) but over 9t GCM combination speed is limited to 80kmh.

Cheng Zhang, FAW SA’s marketing manager says FAW has been present in the South African market for over 20 years and “we have learnt a lot – it’s time to expand.” He says FAW is not aiming at massive fleet deals with the ‘Tiger’. “We want to provide entrepreneurs operating smaller truck fleets excellent value for money and reliability.”

I remember the days in the early seventies when the established players such as Leyland, Mercedes-Benz, Ford and International, all sneered at the Japanese. FAW is taking a long-term view and there’s no place for arrogance in the southern African truck market.