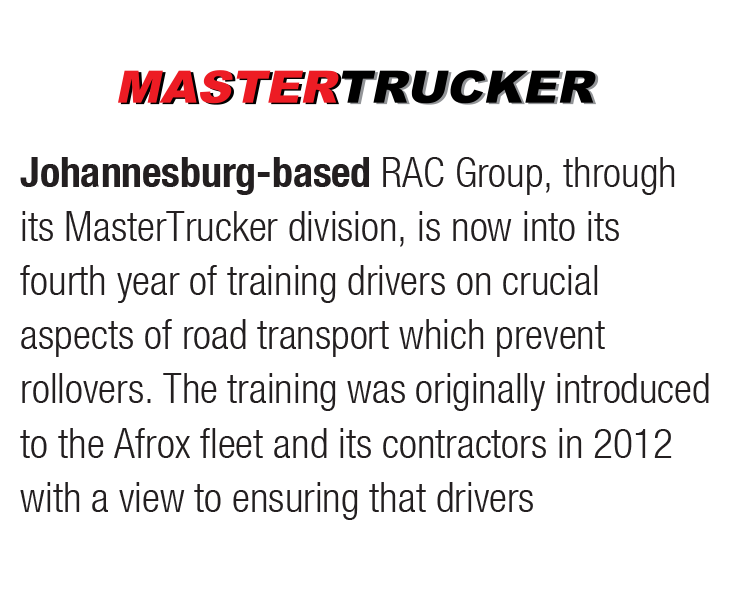 Johannesburg-based RAC Group, through its MasterTrucker division, is now into its fourth year of training drivers on crucial aspects of road transport which prevent rollovers. The training was originally introduced to the Afrox fleet and its contractors in 2012 with a view to ensuring that drivers who deliver Afrox products were equipped with the best internationally recognised capabilities.

Affirming its commitment to the heavy vehicle driver training industry, the training fleet has subsequently been expanded to include a custom designed tanker which facilitates training by allowing drivers to experience the impact on a fully loaded tanker.

Revealed to industry leaders at the Boekenhout facility in Pretoria, the new equipment – fitted with cameras and monitoring equipment – was pushed to the limit as participants at the MasterTrucker open day took turns to experience first-hand the dynamics of the training.

The frequency of roll-over accidents involving tankers in South Africa is much higher than most people realise and by allowing affected parties to test drive the training rig in a safe environment, sensitivities with regard to its challenges were highlighted.

The cost of a roll-over accident is excessive, as the truck-tractor and the specialised tanker equipment is expensive and invariably results in environmental damage to the road surface and surrounding areas. These accidents are usually high profile events with plenty of media coverage which can harm the reputation and public image of the company involved. Costs can be as high as R30-million depending on various factors, not the least of which is company image. Think of the oil spillage and North America when an offshore rig failed!

The Tanker
With a view to improving driving standards and supporting road safety, MasterTrucker has, in cooperation with GRW, developed a dedicated tanker training unit based on the latest European specifications. The tanker is fitted with the latest and greatest from braking specialists Knorr Bremse and axle specialists BPW. Their partnership in developing a training tool suited specifically to South African conditions was invaluable as was the input of tyre giant Continental. The tanker runs on super single tyres on the 3 axles as well as the bespoke outriggers, which take incredible strain in the driver training.

In order to achieve optimum efficiency in the actual training, design engineers from GRW’s tanker division spec’d optimum load distribution factors – an important component in enabling drivers to understand the factors that contribute to a rollover.

The original programme developed under the auspices of TUV Rheinland, a German certification company, has subsequently been enhanced to the point where drivers who engage in ‘mandatory’ two year refresher training see a significant benefit in the time spent in the classroom and truck cab.

MasterTrucker’s success in South Africa – from where it also hosts drivers from the across the African continent as far afield as Nigeria and Kenya – has resulted in engaging with companies in South America as well as in Asia.

Eugene Herbert Group CEO comments: “It’s an endorsement of our training skills in South Africa that we can benchmark the standards in other emerging countries. Many companies recognise that trying to apply training methodology from Europe or other First World companies doesn’t work. Rather go to the experts in the Third World.”

The MasterTrucker instructors recently underwent a specialised HGV training program with VVCR from Holland – acknowledged experts in this field – so as to ensure that besides being the only “gold standard” of rollover prevention training, they can as easily deliver any other truck driver training to international standards. The local programme, enjoys the support of MAN Truck & Bus, BPW Axles, Knorr Bremse, Bandit Signs, Unitrans and Continental tyres.

The Program
Commencing with a theoretical session where scale models of trucks and tankers are used for tactile demonstrations – allowing drivers to be fully engaged – the participants are immersed in practical training, experiencing in reality what was learned in the classroom.

Evident in the compilation of the 2016 training program was the fact that technology in the trucking industry is developing at a phenomenal rate and drivers need to know how this impacts on their use of a truck. A component of the training is dedicated to upskilling and/or educating participants through an interactive component behind the wheel, testing first hand such technology.

MasterTrucker initially focussed on the gas industry and now, with a proven track record, the benefits have been made available to any transporter exposed to such risks. Other players – such as dry bulk movers and concrete transporters – are becoming beneficiaries of bespoke training modules.

“It took a few months to get our specialised equipment in place and the team trained to international standards but now the sky is the limit and we are confident our training will result in a marked drop in the number of crashes involving heavy vehicles on our roads,” says CEO Eugene Herbert.