Home FleetWatch 2016 Isuzu partners with Nkombe to save the Rhino 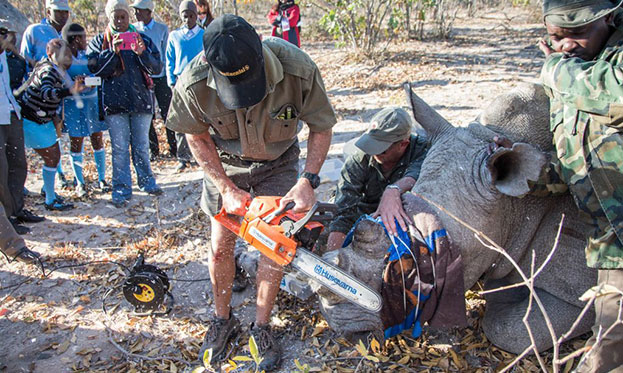 Three cheers to Isuzu for once again embarking on an anti-poaching project in partnership with Nkombe Rhino, a non-profit organisation dedicated to wild life conservation, to ensure the safety of the endangered rhinoceros in the Blue Canyon Conservancy.

The conservancy is situated in Hoedspruit in the Limpopo Province which is the epicentre of the rhino poaching epidemic where incidents of poaching occur on a daily basis. The project targeted all the rhinos on the conservancy and they were all successfully dehorned. The accompanying photographs below show various scenes from the operation.

The de-horning process is part of an integrated anti-poaching strategy which includes educating communities around the reserve, media exposure to highlight the effects of rhino poaching and at the same time inform potential poachers that the animals in the area have been dehorned. This process takes place every 18 to 24 months as the horns grow quite rapidly.

The process involves finding the rhino and tranquilising them from a helicopter. Once the tranquiliser dart has taken effect, the rhinoceroses’ horns are removed by an experienced team led by wild life veterinarian Dr Peter Rogers, who takes great care not to get too close to the sensitive area at the base of the horn.

“Removing the rhino’s most distinctive feature, along with education of local communities and dissemination of information, is part of the measures used to slow the poaching pandemic. This process has been proven to work,” says Brian Olson, vice president vehicle sales, service and marketing for General Motors Sub-Saharan Africa.

He cites the example of Zimbabwe where de-horned rhinos in certain conservancies appear to have a 29 percent better chance of surviving than horned animals. “Previous operations in the Blue Canyon Conservatory have also resulted in a dramatic decline in poaching,” he says.

Along with much needed financial support for the dehorning mission, Isuzu provided a fleet of KB 300 4×4 double cab bakkies as support vehicles in the operation to track and dart the prehistoric creatures. 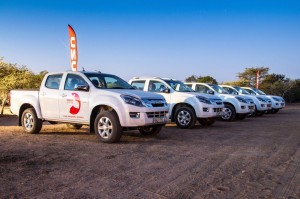 Between 2008 and 2015, an estimated 5 500 rhinos were slaughtered in South Africa for their horns – which have no proven medicinal benefits at all. Poaching estimates of 1 800 this year and 2 153 in 2017 suggest that the situation will get worse before it gets better and if next year’s projection is correct, it will mean that rhino deaths will have almost doubled since 2014.

In some cultures, rhino horn is considered a powerful aphrodisiac and at US$60 000 (R936 000) a kilogram, is more valuable than gold or platinum. For criminal syndicates, the rewards are therefore substantial while for impoverished communities that border national and private reserves, the risks associated with poaching is outweighed by the need for survival.

“Isuzu has a long history of providing real solutions to issues which affect communities within Southern Africa, starting with Operation Rachel in 1993 and Operation Mandume in 2007. Both were very effective campaigns against the proliferation of illegal firearms in Southern Africa.

“This time we are lending a helping hand to Nkombe as a partner in the fight against Rhino poaching. Without concrete action to prevent further loses, we are likely to lose these animals forever,” says Olson.

FleetWatch lifts it hats to Isuzu for throwing its weight behind this fine project. We were there back in the days when Isuzu gave a helping hand to Operation Rachel and we give our full support to Isuzu once again as they help towards fixing another scourge in Africa – the decimation of our rhino population. Way to go Isuzu.

Click here to read about Isuzu’s involvement with Operation Rachel in Mozambique as covered by FleetWatch in August 2000.