Huge congratulations to Hino which built further on its reliability record in the Dakar Rally, the world’s toughest motor race, with both of its trucks completing the route of almost 9 000km in the hectic 2017 edition of this famous event. This was the 26th consecutive Dakar Rally in which Hino has participated and had all its entrants complete the course.

The eighth-place finish by Teruhito Sugawara and co-driver Hiroyuki Sugiura was the best placing by a Hino since 2010 when a Hino finished seventh. Finishing in the top 10 overall is an amazing achievement for the four-wheel drive Hino 500 Series truck as it has a much smaller engine than the huge trucks that usually dominate the top 10 placings in this two-week marathon event. This makes it a David against Goliath contest in the truck category for Hino with its production-based six-cylinder turbo diesel engines of less than 10-litre capacity.

The second Hino 500, crewed by Yoshimasa Sugawara and Takahashi Mitsugo, finished 29th overall out of the 40 finishers from an original field of 54 trucks in this year’s race.

The that raced in the 2017 Dakar Rally were fitted with engines of 9-litre capacity and they finished first and second in the Dakar Challenge for trucks with engines of less than 10-litre capacity. This was the 17th time that Hino has won this special award in the 18 times it has been contested since 1996 and extended the current winning streak to eight years. 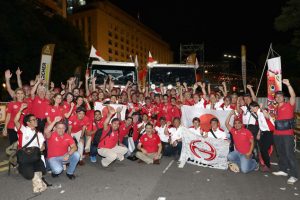 Hino was one of seven makes of truck to achieve a 100% finish this year, with the others being Kamaz, Maz, Liaz, Ginaf, Iveco, Scania, and Mercedes-Benz. The other truck makes represented at the start which did not have a 100% finishing record were: MAN, Tatra, DAF, and Renault.

Hino was once again the only Japanese truck manufacturer to take part in the Dakar Rally as was the case when it entered these long-distance races for the first time in 1991. The most successful year for Hino was in 1997 when it took the first three places overall. In addition, a Hino has finished second overall six times in the 26 events contested.

“We at Hino South Africa are justifiably proud of this wonderful reliability record in the Dakar Rally on which Hino continues to build as the attribute of reliability is one of the cornerstones for Hino’s ongoing success as a truck brand in our country,” said Ernie Trautmann, the Vice President of Hino SA. “This strong performance also under lines Hino’s competitive spirit and technological resources,” he added.

The Chairman of Hino Motors, Masakazu Ichikawa, flew from Japan to Buenos Aires to welcome the triumphant Hino duo at the finish. He said he was very proud of yet another display of reliability in the Dakar Rally as it underlines his company’s passion for technological innovation.

“Trucks form the foundation of logistics operations worldwide and technologies that improve environmental compliance in the form of reduced emissions and better fuel economy, together with providing a powerful overall driving performance and high safety standards are getting more sophisticated every day. Therefore, we believe we need to take up challenges offered to us, which includes participating in rally-raids,” said a Hino spokesman.

“Hino’s world class truck technologies are the products of the company’s fervent mental fortitude and passion. The vision we see beyond the Dakar Rally finishing line is the image of Hino taking on the next challenge that will result in further technological innovation.”

The 2017 Dakar Rally will go down in the record books in terms of being one of the toughest in the event, which was staged for the first time in 1977. Reasons includes plenty of adverse weather – from very hot to cold interspersed by heavy rainfalls and subsequent flooding. This resulted in several timed stages being cancelled or shortened. The extended period racing at high altitude – above 3 000 metres – also took its toll on competitors and their machinery, while difficult navigation compounded the challenges this year.

2017 marked the ninth time that the Dakar Rally has been staged in South America after previously having been run on the African continent. Paraguay this year became the 29th country in the world that has been traversed by a Dakar Rally and made it the fifth South American country to host a section of the event.

Director of Hino Team Sugawara, Yoshimasa Sugawara, continues to rack up records in the Dakar Rally. Now aged 74, he holds the record for the most consecutive finishes in the Dakar at 26 from 33 attempts. He is also the only Japanese to have competed this epic race on a motorcycle and quad as well as in a car and truck. His son, Teruhito, has contested the Dakar Rally 19 times, finishing in the top 10 on 14 occasions.

“This year’s achievement was certainly no fluke,” said Teruhito Sugawara at the finish. “It was the result of a lot of hard work over many months. We are already working on upgrading our trucks for next year’s Dakar Rally!”