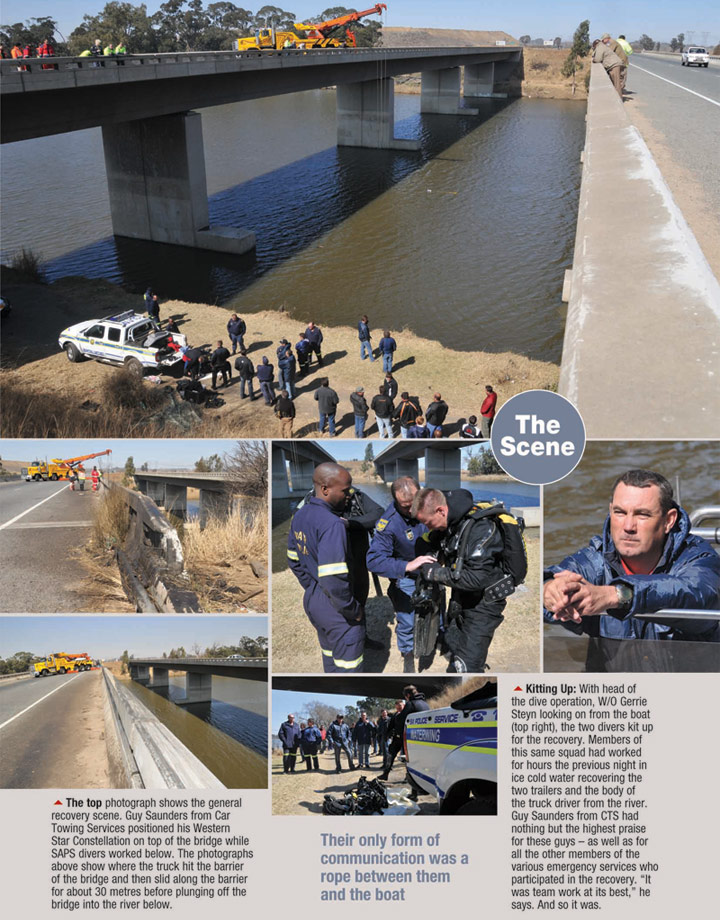 Having been on the scene of many accidents over the years, they are not places one chooses to go to for they are often a mix of horror, tragedy, broken bodies and crumpled metal. However, take all that ‘˜ugly’ away and you will come across some highly skilled, fine people who stay on to clear the scenes. This story , along with the accompanying photographs , is a tribute to all those people around South Africa who work long and hard, often in horrendous circumstances and dangerous conditions, doing what most us would never venture to do. They are, writes Patrick O’Leary, South Africa’s unsung heroes.

It was on national television that night. A truck had gone over the bridge on the R57 near Vanderbijlpark and plunged into the Vaal River below. SAPS divers were on the scene attempting to recover the body of the truck driver and a recovery vehicle was there to lift the rig from the river.

The next day we got a call from Guy Saunders, Johannesburg operations manager for the Car Towing Services Group, who told us the divers had recovered the body as well as the trailer combination , it was a tipper interlink , but they had left the truck tractor in the river overnight and were lifting it out that day.

I rushed to the scene and when I got there, was briefed by Saunders on what had happened. It was at around 2.00pm the previous day when the truck veered to the right on the highway and mounted the protective barrier of the bridge. The whole link slid along the barrier for about 50m before plunging into the river below.

According to Saunders, the divers went in just before dark to retrieve the body. “The visibility was nil and we were hoping the combination was still linked.’

Saunders had positioned his Western Star Constellation on top of the bridge and lowered two sturdy cables to the divers below. The plan was to drag the whole rig to the side of the river so as to make the extraction of the body quicker and safer.

However, when he hauled on the rear trailer of the link after the divers had hooked it up, only one trailer came out. They realised the combination had broken up and that they would have to haul out the second trailer and the truck tractor separately.

By 11.00pm that night, with Saunders and the divers working as a team , him with his equipment from the top of the bridge and the divers in the river below – they had extracted the second trailer. Thankfully, the driver’s body had also been recovered from the cab.

“By that time, the divers had been in the water for about five hours and there was a danger of hyperthermia setting in as it was extremely cold. It was also dark which added extra risk to the operation. We therefore decided to leave the truck tractor in the river overnight.’ And that’s where we are now.

Getting ready for the lift

Having been briefed, I then went down to the river were two divers from the SAPS Water Wing were, with the help of their mates, kitting up to dive and hook up the truck tractor. A boat, skippered by Warrant Officer Gerrie Steyn, co-ordinator of the Vaal Water Police, was on hand to take them to the scene.

The Western Star was again positioned on top of the bridge and Saunders had lowered two cables from the 60/80 NRC sliding rotator , which is capable of lifting 80 tons , into the water where the cab was.  I watched as the boat reached the point of entry and the two divers fell back into the water and prepared to go under.

“What’s the visibility like under there now,’ I asked one of their colleagues.

Standing there talking to these guys, one could tangibly pick up the vibe of camaraderie. This was dangerous work and the guys on shore were feeling for their mates under the water. There was also no vibe of ‘˜we’re the magas’. Rather there was an air of humility about them. These were good guys just doing their job to help others.

As the two divers worked under the water, I noticed that the only form of communication was a rope between them and their man on the boat.

“Don’t they have radio communications in case anything goes wrong,’ I asked.

“Nah, we don’t have anything like that,’ the guy next to me chuckled.

“Absolutely,’ he replied. “But we don’t get allocated the money to buy them.’

Amazing. Here were divers working the night before in pitch dark conditions and the guys below the water have no radios to communicate with the guys on top. Surely this should be standard issue when doing the type of dangerous work they do?

That aside, it wasn’t long before they emerged and got onto the boat. The cables were hooked and it was now up to Saunders to take over.

Looking up to the top of the bridge, I saw him leaning over using the remote control operations module to conduct the lift. Initially, as the rear of the truck tractor appeared, we thought it might break as something was bending.

“It’s not around the chassie,’ one of the cops observed. But then we saw that it was. There were two chains and they were secure. The guys had done a professional job.

Slowly the truck was hoisted upwards, and upwards until it reached the top of the bridge, crested the barrier and was lowered onto the road. As it was being lifted, the two divers were back on shore and stood looking on. You could sense the pride they felt in a job well done. And so it was. Well done guys. All tribute to you. I left the river side and went back up to the top of the bridge.

Preparing for the tow

Saunders and his assistant were now hard at work preparing the rig for the tow back to their premises. The engine and some other components were broken from their mounting and it was imperative that everything was securely tied with chains so as to prevent anything falling off and hitting following traffic during the journey.

He hooked the front of the rig and lifted it. Again an inspection was done to ensure nothing was hanging loose. More chains were applied and secured and it wasn’t long before it was hooked up and ready to go. As he drove off, I looked at the time. It was 13.26pm , just short of 24 hours from the time that accident occured.

I must mention that although Saunders made it all look so easy, not so for there were a number of inherent dangers involved in the lift.

“Although our equipment should never fail because we maintain it to the highest standards, I always keep it in the back of my mind that something could go wrong and thus make provision for an extra safety factor. That’s why on this operation, I used double cables and over-rated chains,’ he said.

“The wind was also a concern but more so, the strength of the current in the river because once free from the bottom, that truck tractor becomes a free floating object and can pull downstream. When you’re lifting from a solid road, if something goes wrong, you can put it down again. Not so in this case. Put it back in the water and it could pull you with the current. Those were the two major hidden threats to the operation but thank goodness, they didn’t materialise,’ said Saunders.

The other thing he had to bear in mind were the people below. “That’s why I was standing on the edge of the bridge using the remote while keeping my eye on the guys below.’

What is also interesting it that as the lift started, Saunders was registering a 15ton load on the hoist. As the truck tractor released itself from the mud, that dropped to 12 tons and then, as it emerged and started expelling the water, the weight lowered to 11 tons.

Well done to Guy Saunders, his assistant and to Car Towing Services. We lift out hats to you.

Just before Saunders drove away, the guys from the Provincial Roads Department arrived with their brooms and packets of Drizet absorbent material to clean up the split oil on the road.

“I can’t allow the road to be opened until the surface had been cleaned of all oil,’ Constable ‘˜Kaaskop, the man who was in charge of the sceen, told me.

Throughout all this, the SAPS as well as Traffic Officials had done a sterling job securing and managing the scene by closing the road and diverting traffic onto other routes thus allowing these guys to do their work safely and without thousands of interested onlookers. Three cheers to them too.

I looked down and thought of the pure terror the driver must have felt as he plunged towards the river. But, having looked around the scene, I don’t think he did feel it. I think he was unconscious. I am no expert but the truck, belonging to Vaal Bricks, was only 15 minutes out of the depot. And it wasn’t going far. The time was 2.00pm when it happened so add all that up and it rules out driver fatigue.

Looking back along the road, there were no skid marks. The only indication that things went wrong was the smashed barrier. So it doesn’t seem he had to swerve or brake to avoid another vehicle. The rig, judging from the tyres alone which is often a good indicator of the general state of a truck, was also in a roadworthy condition.

“It might have been speed,’ one of the cops had ventured earlier when we were discussing probably causes. I don’t think so. I don’t think the driver felt the terror of the plunge into the river. I think he had suffered a heart attack or something similar. Whatever the cause, it was a horrible tragedy and we at FleetWatch extend our sincerest condolences to Vaal Bricks and to the family of the driver.

And to all those involved in the recovery operation, we extend a proud salute to each and every one of you. You are among South Africa’s best.