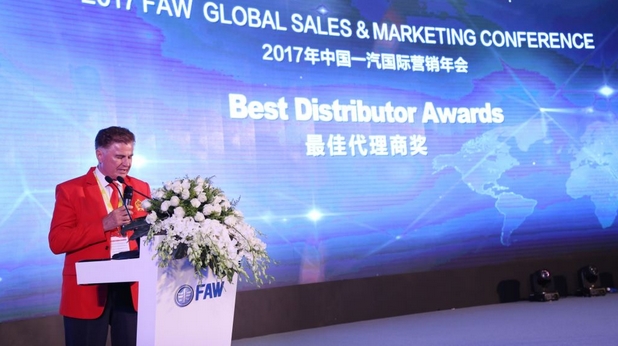 It’s a big congratulations from FleetWatch to FAW Vehicle Manufacturers SA (Pty) Ltd on being recognised as the most determined and successful export and import business unit of the massive FAW Group worldwide by winning the “FAW – Best Distributor Award 2016”.

It was during the FAW Import and Export Corporation’s annual Global Sales and Marketing Conference in Chengdu that Richard H. Leiter, executive director from FAW SA who attended on behalf of FAW SA, was called up to receive the special honour.

Explaining the rationale behind the award, Wang Zhijian, president of the FAW Import and Export Corporation said the award stands for the united spirit of FAW employees and dealer partners who jointly tackle regional and global challenges.

“It is awarded in recognition of singular collaboration between all teams and all individuals working for the company or dealers in sales; aftermarket; service and support; parts and maintenance; and finance and insurance. It acknowledges the teams that have worked according to a co-ordinated strategy with a single unified vision,” he said, adding that the award gives honour to that FAW company which has shown quantifiable results emanating from joint determination and focussed drive.

While the award mainly recognises the efforts of a particular year, FAW SA is continuing with its growth strategy into 2017 having set new benchmarks and company sales records in both January and February this year.

In January, 107 units were sold setting the highest benchmark yet for FAW SA regarding year-on-year growth comparisons. The company then went on improve on this record when it racked up 134 units sold, the most ever recorded in a single month.

This year’s momentum follows on many of last year’s successes where one of the highlights happened in the second half of last year when the Coega-based plant near Port Elizabeth saw its 2 000th locally built truck roll-off the production line, just two years of production began.

Success was also achieved in the export market during 2016 when FAW exceeded the 200-unit mark in exports into African countries in just over a year of exports.

A growing number of Africa truck dealers who traditionally placed their orders from FAW China, continue to move their orders to originate out of South Africa owing to the shorter lead time for delivery, the high levels of quality from the South African plant and the reduced cost of sourcing FAW vehicles on the same continent.

Jianyu Hao, CEO of FAW SA adds: “What is most gratifying is that many of our units being bought by sub-Saharan customers are now 2nd and – soon to be delivered – 3rd generation repurchases. This affirms our commitment for service and support into the African regions.”

The Coega-plant has also been the bedrock for further investments in the region as a number of China-based industrial giants have visited Coega to see first-hand what the region can offer in infrastructure, logistics and labour. The FAW SA plant was the first massive investment by a China-based company in the Eastern Cape region. A number of China-based companies are considering following suit, based on FAW SA’s successes.
Well done FAW SA on this great accolade. Yeah!