Only two out of 10 trucks taken off the N3 last Wednesday evening for testing by the FleetWatch Brake & Tyre Watch team of industry partners and cops in training passed the roadworthy tests. That is horrendous given that the N3 is South Africa’s busiest trucking route. Making things worse is that one owner, when contacted by phone, tried to offer a cop a bribe to let his unroadworthy rig go back on the road with no brakes writes Patrick O’Leary.

There are times when one wants to just throw up your hands and say: “Ah to heck with it. Just go kill yourselves!” Wednesday evening was such a night for me. While this 28th Brake & Tyre Watch event attracted a lot of interest from other media as well as other interested parties, including Ismail Vadi, Gauteng MEC of Roads and Transport, for me it was a downer.

How on earth can eight out of 10 trucks randomly selected on the N3 be found to be unroadworthy? And we’re not talking just minor faults. Five out of the eight which failed were served with Discontinuation of Service notices for having extremely serious braking and other faults. 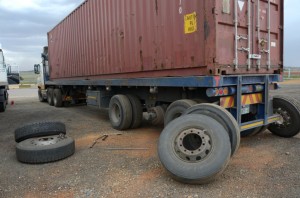 Two of those trucks were not able to be repaired on site for retesting. They had to be towed away the next day. The other three were able to do repairs, two of which had service crews working on them when I returned to the weighbridge the next day at around 12.30pm. It was comforting to see brand new brake shoes waiting to be fitted – but why only after being hauled off the road. Why not as part of a planned maintenance programme by the operator? Is that asking too much?

Section 49 of the Road Traffic Act spells out the Duties of an Operator. One of these duties is to ensure the roadworthiness of the operator’s trucks. So why do so many truck operators run their trucks on public roads in an unroadworthy state? Have they not seen the Field’s Hill video footage where 24 people were killed by one truck? Have they not read of the N12 accident where three people were killed, countless others were injured and 48 cars were wrecked by one truck? Do they not know of the countless accidents and deaths that occur on our roads every single day? Are they deaf, blind or what! Maybe they just don’t care about any of that.

It is totally unacceptable that your and my families have to unknowingly risk dicing with death by sharing the roads with these miscreants. And then one owner had the audacity to offer a cop a bribe to let his truck go. This rig had no brakes on three of its trailer axles. The money offered was R500. The owner did not realise that the cop talking to him had the speaker phone switched on and listening in was MEC Vadis and a host of other people.

So there it is: For R500, the operator is willing to let that death-trap go back on the road for the sake of saving a few bucks on new brake shoes? That’s what your family’s life is worth to this guy. It has got way beyond a joke. For eight out of ten trucks driving on the N3 to be found to be unroadworthy is way beyond a joke. 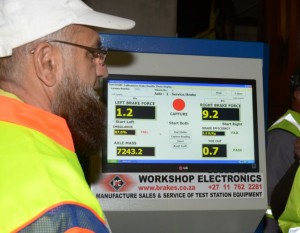 It’s all about basic maintenance. It’s not rocket science and if operators can’t attend to such things before allowing their rigs onto the roads, they should not be in the industry. Perhaps it is time the MECs of the various provinces hauled Section 50 of the Road Traffic Act out of their bottom drawers and started exercising the powers they hold under this section where operator’s licenses can be suspended. Having attended this event and gone into the pits and under the trucks with our various partner experts, MEC Vadi now has a good idea of what we – as the Brake & Tyre Watch team – have experienced on the roads for ages. Perhaps he will be the first MEC to exercise his powers under Section 50.

On the good news front, the exercise resulted in some additional 80 or so cops being trained in how to spot unroadworthy signs on trucks while out on the road. One of the main objectives of the exercise is designed to empower the cops with knowledge which will enable them to spot ‘tell-tale’ signs of unroadworthiness and, if they suspect faults, to send the trucks to the nearest vehicle test centre. They do not have equipment on the road but they do have their eyes, ears – and now knowledge – to conduct visual inspections and pick up warning signs. 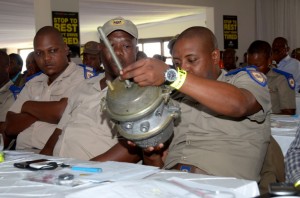 All this is made possible by the unwavering and passionate support given to the Brake & Tyre Watch projects by our stunning partners. They are Wabco, Bridgestone, HCV, Standard Bank, Jost, BPW Axles, the SA Road Federation; MiX Telematics; N3TC (our roads partner for this exercise as it was held alongside the N3); and Freightliner, our manufacturer partner for this exercise. FleetWatch alternates truck manufacturers for each event.

For this event, Freightliner brought along a magnificently decked out Freightliner Argosy hooked up to a tear-drop trailer which was used to show the cops what a roadworthy rig should look like. 3M also came on board for the Heidelberg project so as to raise awareness of reflective tape and chevrons. 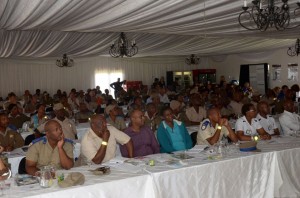 This team, with its combined input of passion, expertise and experience is, in my opinion, a world-class team that provides invaluable training to the cops while also adding enormous value to the quest for improving safety on our roads. FleetWatch thanks each and every one of them. We salute you!

Now if only the operators would start getting it right. It is not hard. It’s just basic vehicle maintenance you need to attend to. Just do it for goodness sake. The lives of your families are also at risk out there and I’d hate to see the day when you have to watch your kids being carried away in body bags as a result of one of your trucks killing them. Surely your family is worth more than a R500 bribe to you. 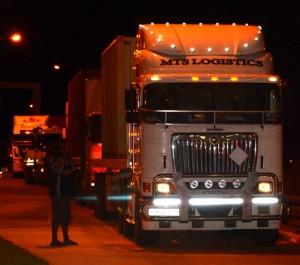 And that is why – although these latest results were a downer for me – none of us involved in the Brake & Tyre Watch project will throw our hands up and say: “Ah to heck with it. Just go kill yourselves!” No, we will keep fighting to save your – and your kids lives – even though judging by the sorry of many of the trucks on our roads, there are operators out there don’t seem to care enough about their families to do that. C’mon guys. Turn the corner. Do it right.

Freightliner shows how it should look 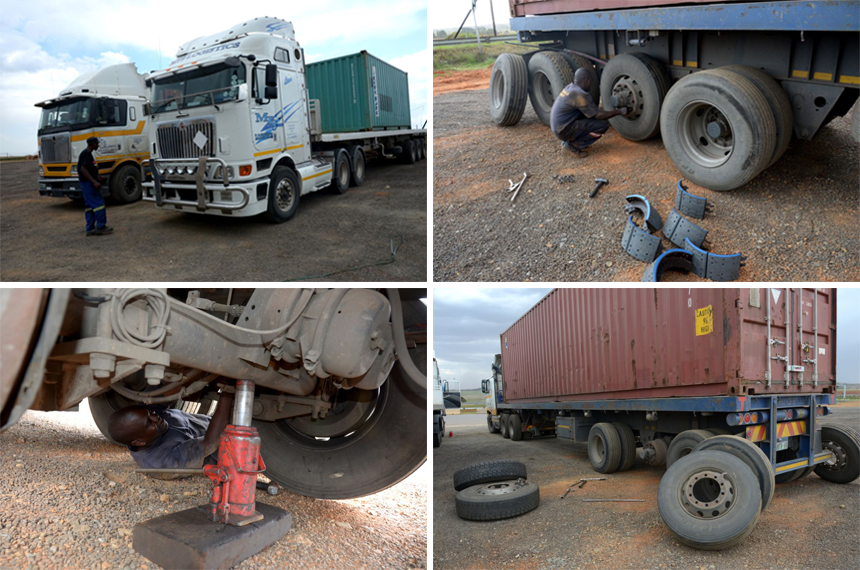 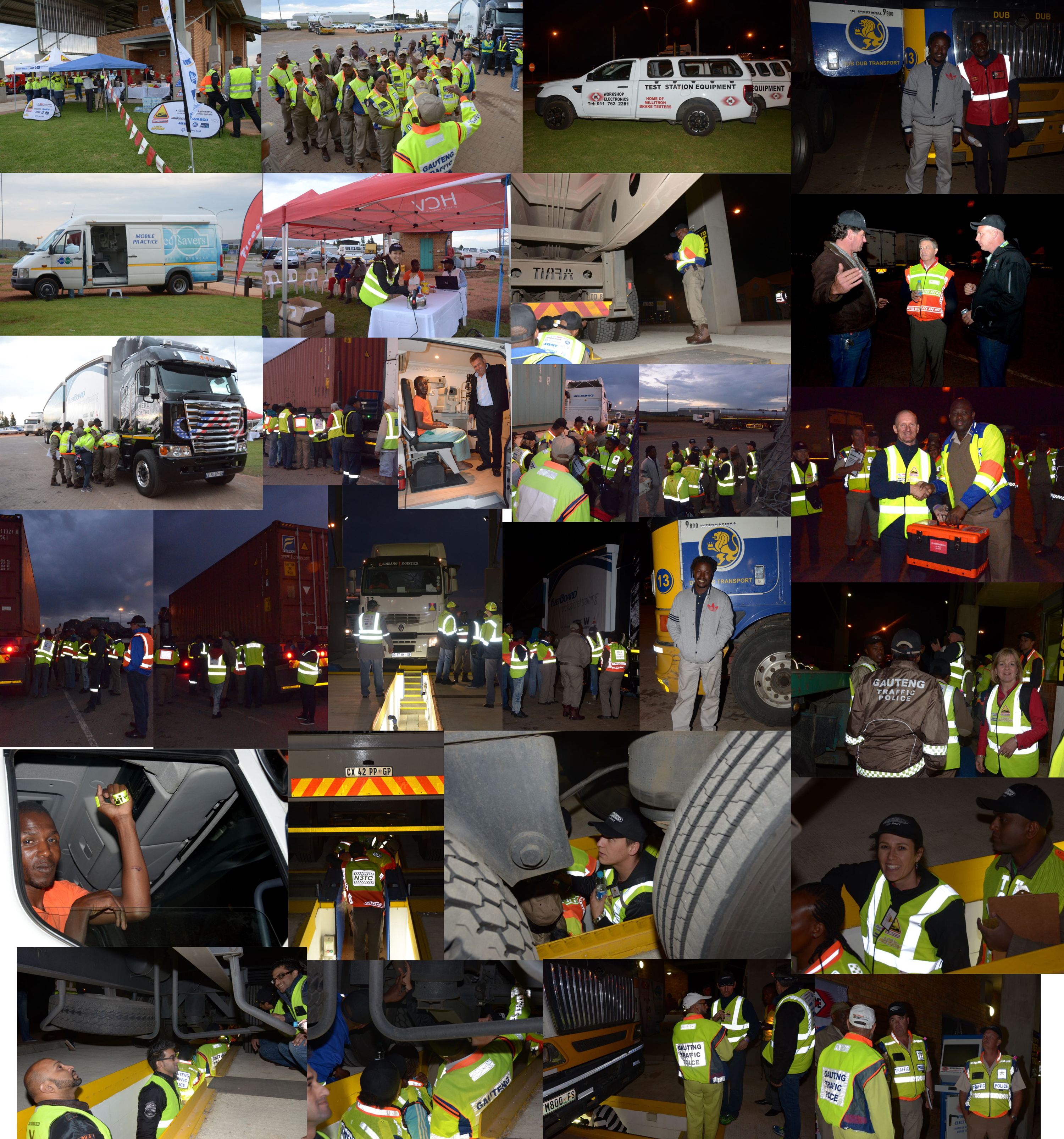