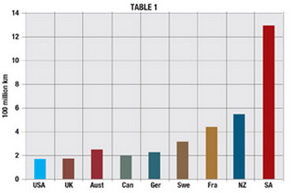 This year’s event, which was held at Modderfontein Golf Course in Edenvale in September, has been hailed as an overwhelming success that has raised the much-needed funds to build guard houses outside the police station, in addition to remarking the parking spaces.

Cummins SA Power GenerationSales Engineer Darrel Moodley notes: “We are exceptionally pleased with the strong turnout, and generous donations received by all of our guests on the day. Without them, this annual initiative would not be possible, and we are grateful for their on-going support.”

Funds will assist to build a guard house at the gate , with police on guard instead of security guards. The station also currently has a number of parking-related challenges due to poor markings. This is another area where Cummins SA will be assisting with the funds raised.

Moodley highlights the fact that the Cummins Golf Day initiative started in 1998 as part of the Business Against Crime initiative. “The Cummins partnership is the only one out of 24 original partnerships that still exists today and, following its enormous support and success, a Section 21 Company has been registered to ensure compliance and proper management of all funds raised.”

According to Moodley, Cummins is already looking ahead to next year’s fundraising projects. “We hope to install a lift at the police station to provide greater access to the disabled. As the child protection unit is on the second floor, a lift will provide improved access for children as well.”

As a socially responsible corporate citizen, Cummins encourages all of its employees to do at least four hours of community service per year, which they are allowed to do during work hours. “The Golf day is the easiest way to raise large amounts of money in a single day, and I would like to thank everybody who donated to this worthwhile cause,” Moodley concludes.

Hats off to Cummins for this initiative! FleetWatch applauds you.