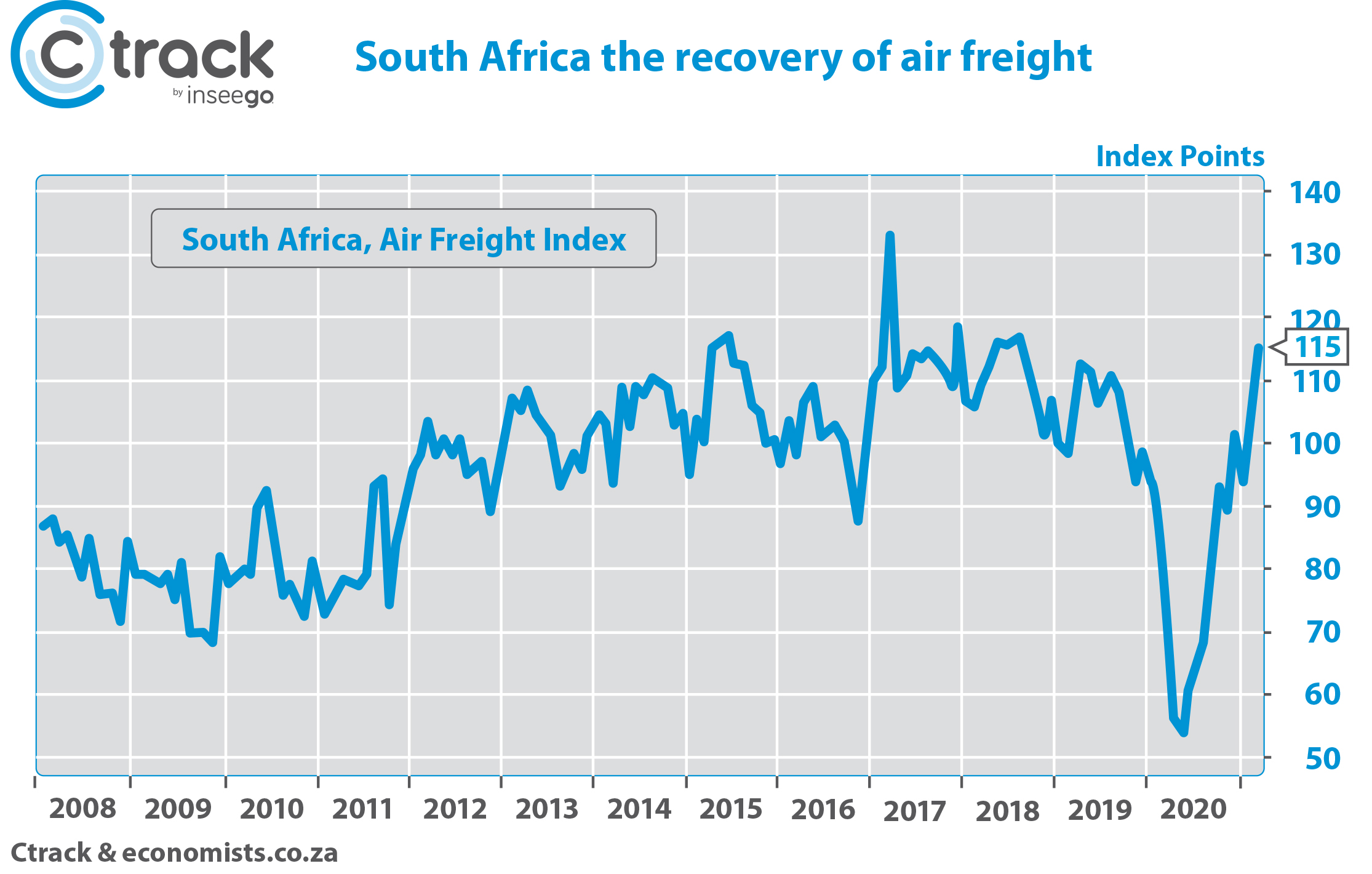 Compared to March last year, road Freight, air freight and pipelines have shown improvement. On the contrary the rail freight sector has gone from bad to worse in recent months.

Even though the COVID-19 pandemic is still a very real disruption, the overall Ctrack FTI only declined by 0,2%. However, some of this recovery is partly due to a low base in March 2020.

“The overall Ctrack FTI may not be back to a cycle of growth just yet, but it is getting very close to returning to pre-pandemic levels following the most prominent economic shock of our lifetime,” comments Hein Jordt, Managing Director of Ctrack SA.

While international trade continues to recover, there are still supply chain disruptions caused by factors such as the recent Suez Canal blockage and the on-going COVID-19 restrictions. Sea freight in South Africa has had a topsy-turvy last few months, but air freight has increased by 17,8% compared to a year ago and an impressive 11% compared to the previous quarter.

One segment’s loss is another’s gain and air freight is now at the highest level since April 2018, and better than 93% of the months in the last decade – although it is yet to surpass the peak of March 2017. For a sector that was almost completely grounded during initial phases of the pandemic, the recovery is astounding.

Road freight too is performing well and has been able to capitalise on the shortcomings of rail freight. Road freight grew by 5,3% compared to a year ago and is just 2,1% off its all-time high. Using just road freight as a barometer of recovery, the South African economy is almost back to pre-COVID 19 levels with only a small step until full recovery is achieved.

The decline of the rail freight sector is a big concern for business organisations struggling to get bulk goods to export markets. Recently Kumba Iron ore reported that the stockpile of ore in the Saldanha harbour is very low due to slow rail transportation. Everything from locusts to floods has been given the blame but in reality, the state of South Africa’s rail infrastructure remains a concern.

“It’s clear that South Africa is ready to do business and is not letting any disruptions stand in its way, opting to find solutions in other transport sectors if need be,” says Jordt.

The Warehousing sector has reported a slight decline compared to March last year and this can be attributed to low stock holding of many products due to worldwide shipping and production delays.

Currently, there is a shortage of containers as well as delayed shipping arrivals in many ports. Often goods do not arrive on time and importers have reported stock shortages of products ranging from vehicles to laptops. These inventory shortages are made worse by the inability to get the product to export harbours due to the decline of rail.

Overall, a 0,2% year on year decline in freight transported and stored in South Africa – although from a fairly low base – is not a bad outcome. The recovery in all sectors except rail has been quicker than expected and it is great to see the goods economy bouncing back, although other sectors such as the tourism industry may take years to see the same recovery.

“The transport sector as measured by the Ctrack Freight Index is an excellent indicator of the goods economy and it is great to see that these industries are almost back to pre-COVID levels, from where we expect continued growth as things begin to normalise,” says Jordt.

Footnote: The Ctrack Freight and Transport Index is compiled by renowned economist Mike Schussler as a joint service with Ctrack to the industry.