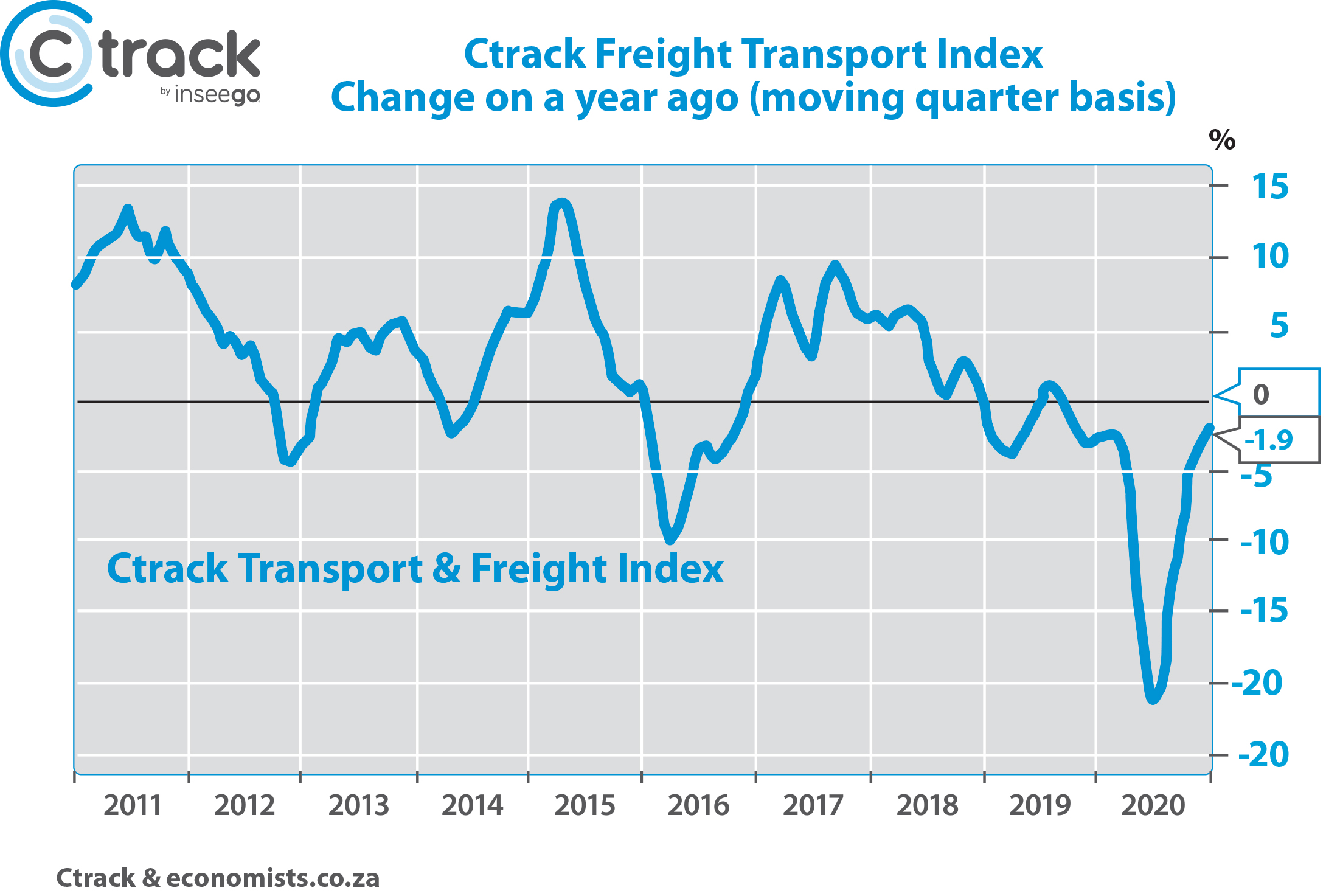 The total Ctrack Freight Transport index declined by less than 2% compared to December of the previous year, which is a very good indication of the economic recovery of the trade and transport of goods.

“The Ctrack Freight Transport index shows that the economy is slowly getting back to normal. However, government needs to ease the restrictions on sectors such as travel in order for the industry to show further recovery,” says Hein Jordt, Managing Director of Ctrack SA.

The Ctrack Freight and Transport index is still tracking 5,6% below its 2019 high and 7% below its all time high achieved early in 2018. This shows that prior to the first COVID-19 lockdown, the South African economy was already in a recession and until major economic sectors such as travel and tourism return to normal, it is unlikely that the index will get near those previous record highs.

For many decades, air freight has been one of the fastest growing freight transport sectors. Due to the fact that the tourism industry remains under immense pressure, a closer look at the air freight industry was warranted as traditionally passenger aircraft carry more cargo than actual freight aircraft.

Air freight reached a twelve year low in May 2020 but has remarkably recovered to record its first increase in volume of cargo and freight ton per kilometer. For the first time in 20 months, the volume of air cargo, number of unscheduled flights and the IATA international air freight indices all showed positive growth, with a 2,1% year on year growth.

“The improvement of air freight in the final quarter of 2020 of 30,6% is nothing short of a miracle. This performance is amazing if one takes into account that there was less international travel and fewer scheduled flights and shows the resilience of this sector,” says Jordt.

Of course the recovery of air freight is good for the trucking sector as trucks deliver and collect on each side of the air routes.

Even though Africa faired slightly better than the rest of the world during the COVID-19 hard lockdown, air cargo was the worst affected sector globally with IATA estimating total losses of $86-billion (R1,3-trillion) in 2020.

In South Africa, air freight received no government aid, space was at a premium as there were less flights and prices rose by between 200% and 300% – yet the sector has bounced back against all odds showing how resilient it is. Over 20 000 tons were transported during the month of December despite curfews and international flight limitations.

57% of all air freight is transported as belly freight aboard normal passenger aircraft while the remaining 43% is flown on dedicated cargo planes. Further recovery in 2021 is expected to be slow as passenger air traffic is still far below normal levels and this is likely to continue for some time.

It does, however, seem that an increasing number of cargo planes are taking to the skies. Approximately 80 aircraft have been dedicated to the worldwide vaccine rollout while continually increasing air freight costs have also resulted in operators making more cargo aircraft available.

With Airfreight making up only 5,1% of the Ctrack Freight Transport Index, some may think that it is not an important sector. Air freight comprises 2% of the freight that crosses the border by weight compared to the 60% of sea freight. However, air freight makes up about 30% of the value of cross border trade.

What is happening in air freight now?

Local air freight is showing positive growth. However, the combination of the extended curfew and border closures are bound to have a negative impact during the months of January and February. Predictions are that this is will only be a short-lived hurdle with the curfew expected to end in the middle of February and borders to open in March. Sectors that rely on fast-moving high-end goods like mobile phones, tablets, laptops and medical equipment cannot withstand another lengthy period of disruption in the air freight business.

On a quarter-to-quarter basis, the pipeline volumes have grown by 88% while storage grew by 13,1%. The growth in storage can be attributed to the combination of a less than perfect Black November retail campaign that resulted in a surplus of retail goods and supply chain disruption fears.

Sea and road freight grew by a respectable 3,5% and 2,6% respectively. Interestingly, despite the long border delays at two of South Africa’s most important border posts, truck attacks and a host of other problems, the trucking industry did better than was expected.

Sea freight did slow slightly in December but it is not of major concern as it seems to be due to international supply chain, as opposed to local issues.

The only sector of the Ctrack Freight Transport index that showed negative growth during the quarter was rail with a decline of 2%. There are unconfirmed reports of rail tracks being stolen in some areas and this may have some effect.

In summary, the overall freight sector grew by between 2% and 5%. This is lower than normal but acceptable given the large number of external factors that are putting pressure on the various industries.

While these figures might not be cause for celebration, they do signify that the worst is over for the industry. Times are still tough but at least things are moving again.

“It is great to see that almost all sectors that are measured as part of the Ctrack Freight Transport Index are on the road to recovery,” comments Jordt.