Home FleetWatch 2015 Bridgestone helps to get books to learners

School learners in the North West have been given greater access to books courtesy of Bridgestone South Africa who have sponsored a school mobile project.

This was announced at a recent launch of an additional seven mobile libraries for the North-West Province, increasing the total from just two vehicles, to nine in the next year. Bridgestone is committed to supplying all Mobile Library Vehicles with tyres as required.

“The typical mobile library is a converted bus which offers a selection from over 550 000 children’s books available to the project,” explained Bridgestone Internal Sales Manager, Chantel Baxter. “The mobile libraries travel long distances to bring literacy to learners, and tyres are an ongoing running expense. Bridgestone is pleased to be able to assist in reducing this cost.” 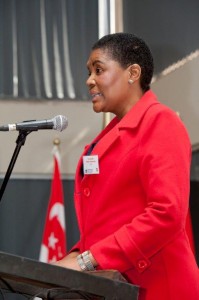 All nine provinces of South Africa now offer a mobile library service to schools without libraries of their own, and more than 50 mobile libraries bring reading and literacy to over 880 schools across the country.

The Mobile Library Project is overseen by SAPESI (the South African Primary Education Support Initiative) and is now in its eleventh year. Apart from the books themselves, the mobile libraries also each carry a generator to ensure that they can functional fully in areas where there is no electricity.

“Fewer than ten percent of South African schools have a functional library,” Baxter commented. “Literacy is one of the cornerstones of education and the launch of the new mobile libraries in the North-West will be a great benefit to the school children they serve,” she concluded