FleetWatch has often spoken of the ‘heart’ of this industry and this has once again come to the fore via Bridgestone donating R1-million to PinkDrive to assist the organisation in its fight against breast cancer. The money was raised via the “Pink Valve Cap” project launched during 2014. The Pink valve caps were sold at participating Supa Quick dealers for R50 and all proceeds were donated to PinkDrive.

At the recent handover function, Bridgestone South Africa’s CEO, Mike Halforty, explained that Bridgestone came up with the idea that would not only captivate their stakeholders but at the same time raise money for this worthy cause.

“The Pink Valve Caps is a stylish add on to a vehicle and the patrons who purchased them can showcase that they have done their bit to assist this initiative” said Halforty. He further stressed the importance for Bridgestone to be ambassadors of change within the industry by adding: “We are proud to be associated with PinkDrive and to know that we are actively helping PinkDrive to make difference. We hoped for the best when we launched this product and we are more than satisfied with the outcome.”

At the handover of the cheque, PinkDrive’s Noelene Kotschan, CEO and Founder, was overwhelmed with this donation. “I am at a loss for words. How does one thank a committed organisation and the public for their contribution to financially assist PinkDrive? With this donation, through us, you will directly help thousands of people in communities by raising awareness and educate them on breast cancer” she said.

Kotschan also thanked Bridgestone for providing the tyres for all the PinkDrive vehicles. “Bridgestone, since inception, has been the tyre sponsor for the PinkDrive fleet. They have also generously provided tyres for the new truck that PinkDrive will give birth to this coming October” said Kotschan.

The monies raised from this initiative will go towards building new mammography units as well as keeping the existing units on the road. The earlier breast cancer is detected, the higher the likelihood of a successful cure. However, many South Africans don’t have access to the technology to detect breast cancer, and PinkDrive aims to reach them with modern screening tools and education, through the mobile units.

FleetWatch is proud to have had a hand in this project when it was originally launched back in 2009 when Kotschan approached us for help with the trucking side of the campaign. We contacted Isuzu Trucks who immediately agreed to sponsor the servicing of the vehicles and also introduced Kotschan to the delightful Mandy Lovell, former PRO of Bridgestone, who didn’t hesitate in coming forward with sponsored tyres. As Kotschan says, Bridgestone has, since then, been the tyre sponsor for the PinkDrive fleet – and now the company has donated a further R1-million to the cause. It’s all the right stuff. These pictures go back to the day of the launch of the PinkDrive campaign. That’s Mandy Lovell holding one of the sponsor’s certificates. A board thanking all the sponsors and contributors was also on display along with a graphic chart explaining in simple terms how it all work. Not so simple, however, is the state-of-the-art equipment fitted inside these trucks to screen for breast cancer. 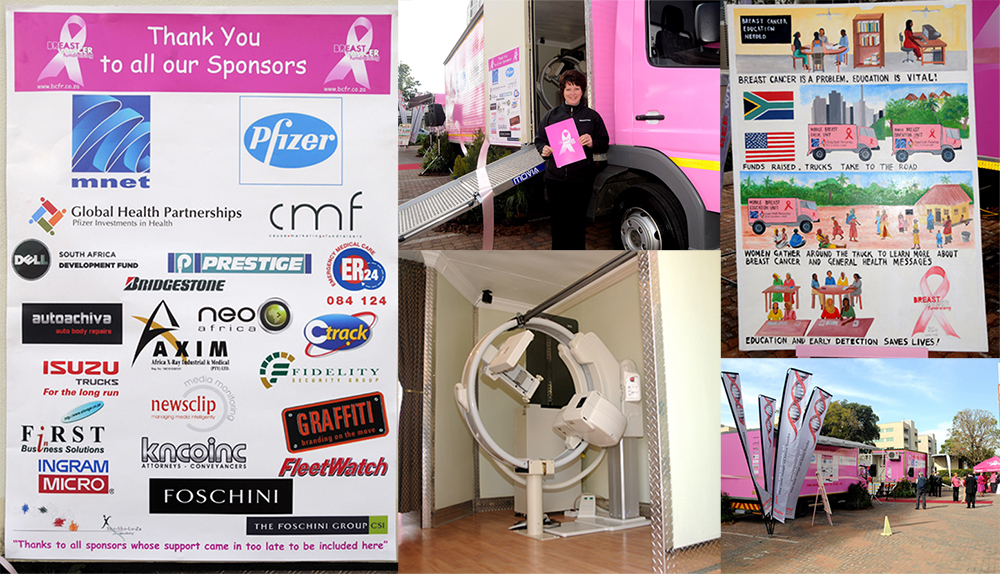