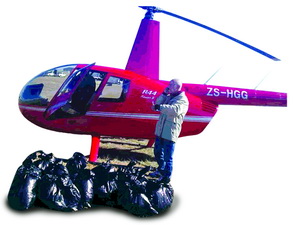 Three cheers to the Value Group, and particularly CEO Steven Gottschalk, who authorised an aerial rescue mission to help his company drivers , as well as drivers from client companies, who were stranded in the recent snow storm that hit the Free State.

On Wednesday July 28th, with drivers already having been stuck in the snow and long queues of trucks from Monday night, Gottschalk issued an instruction to charter a helicopter to search for stranded employees and to deliver to them much needed aid in the form of food, water and blankets.

Despite many rescue attempts by road, the employees could not be reached and faced another night out in extremely cold conditions. The helicopter left Rand Airport at 12 noon sharp with Trevor van Rensburg, a senior manager of the Value Group, on board with the pilot. He was armed with specially packed parcels to equip the company’s drivers to cope with the extremely harsh conditions.

Constant cell phone contact with the employees ensured that their morale was high. They knew they were not alone and that management was working around the clock to get provisions to them. When the helicopter took off from Rand Airport, an sms was sent to all Value Group drivers telling them to look out for it.

Due to the bad conditions, the bright red helicopter had to land quite far from the vehicles with Van Rensburg then making his way through knee deep snow and at one stage, having to run about 1 km on the highway to deliver the parcels.

Van Rensburg reported back that many other truck drivers had left their vehicles in search of food and warmth. Some of them though, had been picked up by the military and been taken to 5SAI in Ladysmith where they were given food and shelter.

However, all Value drivers remained with their trucks at all times. They knew that help was on the way and when it arrived, they were thrilled. Well done to the Value Group for a stunning display of caring!