Home FleetWatch 2017 A salute to all South Africans and a special salute to... 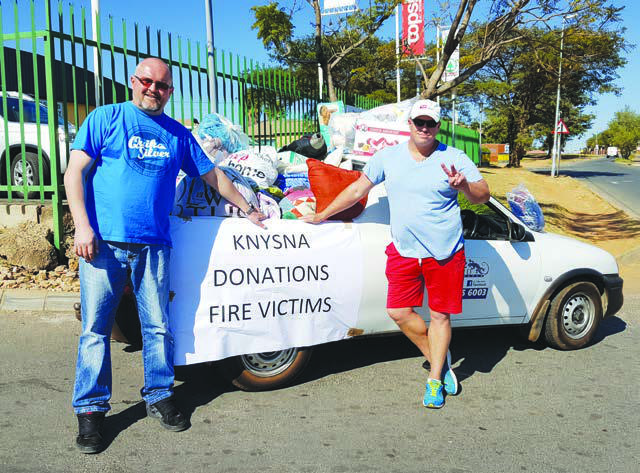 After being bombarded on a daily basis over the past months by an avalanche of bad, bad news centred around the numerous shenanigans of President Jacob Zuma and his awful Gupta mates, along came a monumental storm in the Western Cape followed by horrendous destructive fires in Knysna and surrounding areas. How much worse can it get, I asked myself? South Africa is being battered from all sides with Mr Average South African bearing the brunt of the numerous negative impacts arising from these destructive influences.

But then – a surprise! What the politicians have failed to do, the natural elements succeeded in doing. Certainly, the Western Cape storm was ferocious but it was the fires in Knysna which proved to be the turning point in the unveiling – once again – of the true spirit of South Africans. As news started filtering through of the horrendous destruction caused by the fires, South Africans of all colours, from all walks of life and from all corners of the country rallied together to help their fellow South Africans.

While the destructive actions of the politicians of this country have concentrated on dividing the nation, the destructive Knsyna fires served to unite the nation in a common purpose – to help each other. At the forefront of these efforts was the trucking industry with companies from all over the country making their trucks and warehouses available – free of charge – to collect and deliver goods given by caring citizens to Knysna. What really struck me was the show of unity, caring and giving that ran through the country.

This is so different to what we are seeing from the so-called leaders of this country who are more focussed on take, take, take rather than on give, give, give. It’s all about me, me, me with scant regard for the people of this country. The response of the people of South Africa to the Knysna fires once again brought the ‘GREAT’ back into the picture. On this point, I read an enlightening comment written by Afzal Hamed of SA LongDistance Truckers. “We have a lot wrong in our country. We have a lot of divide along race lines but in times of crisis, all that falls away and we stand together as one.

Because in the end, humanity will always win and no negativity and hatred can beat that. Remember people, that humanity will always win. We just have to believe in that.”This ‘humanity’ hit home when I went up to our local shopping centre. Parked at the entrance was a bakkie with a sign on it: “Knysna donations – Fire Victims”. Two guys were standing at the bakkie taking donations from people coming into and out of the shopping centre. I
parked and went over to talk to them.

Their names were Quartus Botha (on the right in the picture) and Wimpie Dykstra. They had given up their Saturday morning to collect donations from the public – and the public were giving. The bakkie belonged to Quartus’s company, Purple Lizard Landscapes. Once the bakkie was full, they were taking the goods to a central collection and distribution point in Randburg from where trucks would be taking the goods they had collected – along with mountains of other donations – to the Knsyna victims. No-one had asked them to do this. They weren’t getting paid for doing it. It was just their sense of humanity that made them do it.

This example was duplicated all over the country. The many trucking companies that gave freely of their services are too many to mention here but I highlight this little bakkie below as the representative of an industry sector that always has – and always will – come to the aid of their fellow South Africans in times of need. If ever there is was lesson in humility and humanity from which our politicians could learn, it lies in the response of the people of South Africa to the victims of the Knysna fires. South Africans once again STOOD AS ONE. It is just such a pity that this was catalysed by a fire rather than by a ‘leader’. Salute to all South Africans and a special salute to the trucking industry! You are the best!