In the November 2003 edition of FleetWatch, we documented the on-going tragedies that occur at the intersection of the R24 and Hendrik Potgieter roads in Johannesburg. Wynand Petzer, a paramedic now working in Australia, adds his voice to the plea.

Several voices are shouting out instructions over the noise of the machinery and equipment. “We’ll use the  bulldozer as leverage to pull the bakkie up!’ “Any way of stabilising that truck?’ “We’ve got diesel all over the place. Let’s not waste time here’¦.where are those fire extinguishers?’¦. ensure that they’re close!’ The cables tied to the rear bumper of the bakkie start to tension and separate the mangled metal. The truck starts to tilt and the nose of the bulldozer strains forward under the weight of the load. Not part of this bulldozer’s daily work but it’s all we have right now. “We need to pull the RunX in the opposite direction or we won’t get the bakkie turned over.’ “Use that tow truck, secure the winch and pull it back.’ “Watch that diesel, it’s pouring out now!’ The details of the call were quite simple: “Truck versus unknown number of cars. Pinehaven Crossing.’

Not again, I thought. I knew exactly where to go. Yet another ‘˜runaway’ truck had ploughed into cars at the intersection during peak hour traffic. Everything that got in the way has either been crushed or launched across the busy intersection. The cab of the truck has come to rest almost upside down on the mangled wreckage of a 4×4 and Toyota RunX it has crushed. Several other cars have been ‘˜flicked’ across the intersection by this 40 ton monster and it has spewed its cargo of chicken compost all over the intersection. Four inches of chicken sh*t, mixed with diesel, petrol and oil makes it a rather unique odour!

Trying to make sense of it all takes a few seconds. Who’s injured? Who’s in the truck? Anybody buried in the wreckage? How many cars are involved? Who is in each car? Where’s the truck driver? I get directed around the cab of the truck. Bystanders are pointing to the bottom of the wreckage. As I get closer I can hear screaming. The diesel the compost I’m standing on. More sirens in the distance! Good to hear, going to need all the help we can get! A quick look into the wreckage below reveals what looks like one victim, trapped by the mangled metal. I have to shout over her screaming to get her attention and calm her down. “We’re here to help!’ “Were you alone?’ “You need to listen to me! We’re going to get you out of there!’ There’s no access to the cab of the 4×4 from this side of the RunX. It’s been turned over onto its roof and dumped directly on top of the smaller car. The drivers’ side now lies crushed between the car below and the weight of the truck above. I need to get to the other side. There’s no screaming coming from the 4×4.

All I can see is the top of his head. He’s very still! No response. I can just get my hand around to his neck to feel for a pulse. Nothing. Some help has arrived but further assessment just serves to confirm that there is nothing we can do even if we could get to him. “Get the P3’s (priority coding used to indicate the ‘˜walking wounded’) into one area.’ “How many ambulances do we have on scene?’ “Get the ambulances moving with the lower priorities, keep two here for now for the other two.’ “This entrapment is going to take a while, any helicopters available?’ “We have access to the RunX now. Let’s get in there and assess!’ Generators start and compressor hoses are snaked towards the wreckage where firemen now work to access the ‘˜voice’. A Paramedic has managed to crawl into the near side window and confirm that she is trapped from her knees down.

The bulldozer manages to pull the cab of the truck just enough to secure chains and cables and allow the ‘˜jaws’ to do their work. Assessing the full extent of her injuries is almost impossible where she is and the risk of further injury to her or any of her rescuers is exceptionally high. One spark in the wrong place! One cable not being able to bear the weight! Painstakingly, inch by inch, equipment is manoeuvred into place. An hour passes. One and a half. Several attempts and some very nervous moments before enough metal is moved to release her from the wreckage. Her screaming stopped a while ago – probably replaced by prayer. The cheers from the onlookers as she’s pulled from what looked like a certain grave startles her back to life. A quick assessment and then a lights and sirens drive to the nearby hospital for her , the lucky one? 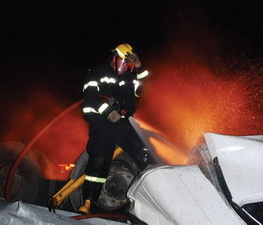 It’s two hours on and only one ambulance remains at the scene. The others have all left for various hospitals or taken off to other calls. This one gets to do the paperwork that gets done far too often at these incidents , ‘˜the D.O.D’ or Declaration Of Death. At the top of the hill, the crushed and mangled wreckage of a little blue car looks over this intersection that saw death again today. Now many years later, the wreckage still remains after a distraught father had placed it there after his daughter had been killed in a similar incident. The sign below it reads “1 TOO MANY’ and a banner reads ‘˜Stop the killing! Build the flyover’. The nose of the bulldozer has now managed to tear the 4×4 from the RunX while the winch from a tow truck strains in the opposite direction. The crushed remains of the twin cab hangs precariously about two meters off the ground. There’s no way of turning it at this point. Freeing the driver will have to be done as it hangs. “Get the jaws, we’ll try and pop the door.’ “Let’s get some more light over here.’ “How secure is that cable holding this thing?’ I stand about five metres away listening to the firemen and other uniforms planning this ‘˜rescue’. They go about it as they would for any other entrapment. Do this, secure that, check this, do that! Step by step as it’s been drummed into them. Only one difference?

His lifeless body hits the ground. The sound worsened by the coroners’ stretcher that has been ‘˜waiting’ for it. “Can you check for some ID,’ someone asks me? “Looks like his wallet is in his pocket?’ The picture inside has me wanting to believe again and I’m praying again! Inside the left hand sleeve under a plastic photo holder is a picture of his little one and his partner. Hubby won’t be home tonight! Daddy won’t be home tonight! Daddy won’t be home ever again! Most people will go through life without ever having to look at death in the way I did today! Most won’t need to think about those that didn’t make it home. Those that are waiting to hear from a loved one, wondering why they are running late tonight? Those that will get a call asking them to come to a hospital or morgue or have a stranger knock on their door to give them the news.

The man at the top of the hill who every day looks at the wreckage his daughter died in. He received his call many years ago and it’s probably what makes this such a bitter pill to swallow! If only someone had listened to his pleas! This is not the first time I am standing in this intersection! This is not the first, second, third, fourth or fifth truck that has ploughed through this intersection! It’s just one of the many that has destroyed lives for far too long now. How many more calls will be made before someone does something about this? How many more must die? How many orphans and widows do we want to see before someone acts?

If the flyover is out of reach, or budget or whatever other excuse they want to hide behind, then take some other action. Static speed cameras? A few concrete barriers? Signage , lots of it! Some active policing (if that still exists?). Just do something! Stop the speed, stop the bad driving behaviour.

Stop the killing at Pinehaven! I now join the ever growing list of people pleading for some action to be taken before we see more lives senselessly taken or ruined while our authorities ignore our requests. Let’s make them see the light before they end up looking into it at the Pinehaven crossing; or before someone has to make yet another call to some family telling them that Dad won’t be home , ever.

FleetWatch thanks ER24 for the images supplied in this article.