Home FleetWatch 2021 A bump in the road to recovery 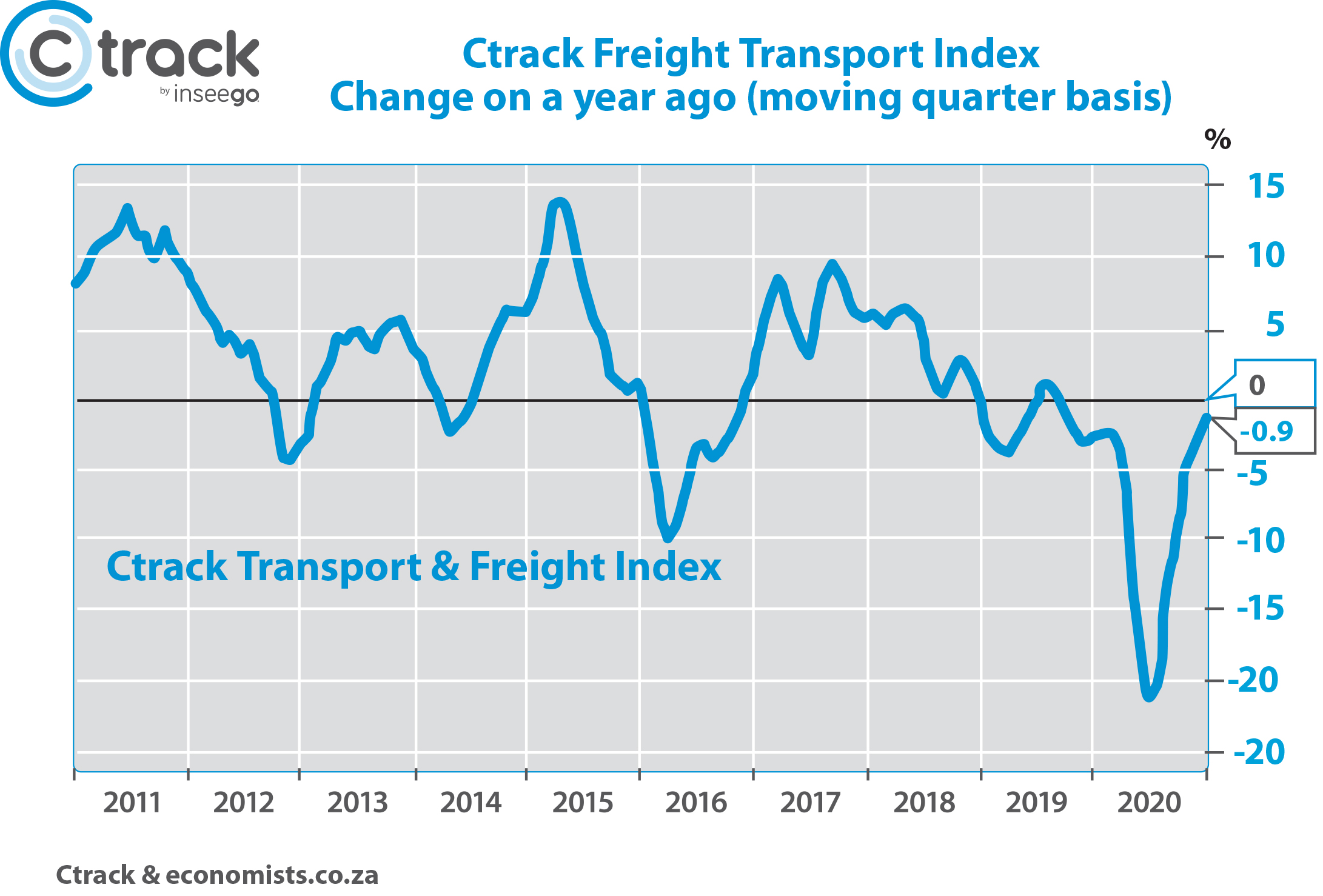 After an excellent recovery by South Africa’s logistics sector as measured by the Ctrack Freight Transport index, the industry took a slight breather during the month of January. It seems the increase in Level 3 restrictions had a detrimental effect and the total freight transport sector showed a decline of 1% in January.

While the year-on-year numbers improved, the monthly numbers showed a significant 4,7% decline between January and December. This resulted in the quarterly figure adjusting from a 5,3% increase to only a 2,4% increase.

“The Ctrack Freight Transport index shows that after a near perfect recovery in the closing months of last year, all sectors were slow to get going in 2021,” says Hein Jordt, managing director of Ctrack SA.

Good news is that the freight transport sector is likely to remain busy this year. Uncharacteristically, Chinese manufacturing remained open despite their Luna New Year celebrations at the end of January as supply disruptions has meant that factories are behind with their orders.

Competition for freight space is so fierce that companies are paying exorbitant premiums to get on planes and vessels as well as applying more flexible shipping methods to avoid delays.

Currently South Africa is facing a shortage of normal containers and sea freight is being loaded and offloaded in phases as the supply disruptions have caused havoc with scheduling of ships arriving and leaving harbours all over the world.

Freight transport across the globe is currently rather unpredictable and transporters need to plan to avoid getting caught out by an influx of goods arriving one month followed by a drought of goods the next.

Major shipping and freight companies around the world are increasing prices and changing ships to try to cope with the disruptions brought about by the pandemic and lockdown restrictions. Fortunately in Europe trucks have been allowed to operate almost as per normal, despite the lockdown restrictions but there are some reports of delays.

With the world economy expected to grow over 5%, it is likely that international sea freight will recover sooner than later while air freight will take another year or two to bounce back to previous levels due to the slow recovery of passenger leisure travel.

East Asia and the Pacific Rim countries will lead the growth once their ports return to normal. Many ports in that region are currently suffering delays due to congested terminals with ships having to wait days or sometimes weeks to get into a berth.

“Unfortunately, South Africa’s stricter Level 3 restrictions announced in the first week of January put the brakes on further recovery but it seems those hurdles are now behind us and we are looking forward to growth in most of the sectors that are measured by the Ctrack Freight Transport Index as 2021 continues,” says Jordt.

While the international freight swings between two extremes, the tonnage of rail freight has showed an 8% year on year decline. For four months Rail Freight has declined in tons transported compared to a year ago. This is strange as South Africa is currently seeing a commodity price upswing and road freight has begun increasing freight tonnage moved compared to the previous year.

Road Freight only declined slightly last year and has actually had two consecutive months of year-on-year growth. It is rare that road and rail have such a big divergence in direction and this should be of concern to rail freight operators as rail is certainly losing tonnage to road transport. Along with a slowdown in bulk exports, it could be a once off situation but indications are that rail has also lost market share in general goods that are transported on land.

Overall rail income for the year to date has declined by an estimated R4-billion which equates to 9%. While road freight also declined during Level 5 and Level 4 in 2020, it has since recovered while rail has not.