How cool is this? The one millionth Mercedes-Benz Actros truck tractor produced in Wörth, Germany, was delivered to long-standing South African customer Imperial. The milestone Actros 2646 LS 6X4, a three-axle tractor unit in arctic white, will soon be seen on South African roads.

“We are very proud to have already put one million Mercedes-Benz Actros trucks on the road from our Wörth plant. The Actros stands for maximum economy, safety and comfort. Among other things, the truck impresses with its fuel efficiency and that’s what makes it a global bestseller,” says Buchner.

The first Actros was launched in the market in 1996 and since then, the Actros has become the most successful heavy duty truck in the world. Among some of its most notable improvements is a reduction in fuel consumption and increased driving comfort. 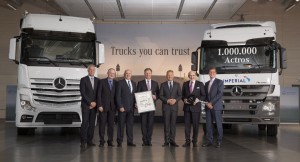 “Mercedes-Benz South Africa has sold Actros trucks to countless customers. We have chosen Imperial Logistics as the most appropriate recipient of the one millionth Actros given the extensive, mutually beneficial business relationship developed over a long period. We also recognise the leading position Imperial Logistics has as a professional operator not only in Africa, but across the world. We appreciate their unwavering loyalty to the three-pointed star, as this demonstrates that our products are superior when it comes to quality, economy and reliability,” says Van Zyl.

One of the reasons Imperial Logistics uses the Actros is how easily the trucks can be customised to suit its various applications. They are also backed-up by a professional dealer network intent on ensuring maximum vehicle availability.

“First-class logistics services need first-class trucks. Therefore, for many years, we at Imperial have relied on the collaboration with Mercedes-Benz Trucks,” says Lamberti.

Wörth is Mercedes-Benz Trucks’ largest plant and was established in 1963. It produces the Actros, Antos, Arocs, Axor and Atego. The Mercedes-Benz Special Trucks division vehicles Econic, Unimog and Zetros also roll from its assembly lines.

Up to 470 trucks – customised according to customer requirements – leave Wörth each day.  Customers in over 150 countries value the plant’s claim:  Quality made in Wörth.

Daimler plans to invest one billion Euro for modernization and expansion of the site by 2020. Around 11,400 employees work at the Mercedes-Benz Wörth plant.